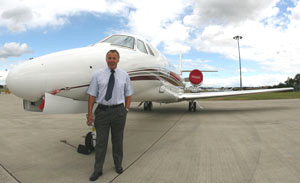 When a British Airways jet crash-landed at Heathrow airport earlier this year, Kingston University graduate David King was the man tasked with leading the investigation to look at what went wrong. The Chief Inspector of Air Accidents has examined numerous serious aeroplane incidents over his 35-year career with the Air Accidents Investigation Branch working behind the scenes making safety recommendations. Now he is stepping into the spotlight to be honoured on Kingston Universityâ€™s Wall of Fame, which pays tribute to some of its most high-flying graduates. Mr King joins more than 20 accomplished alumni from the worlds of business, law, fashion, science, architecture, design and sport whose photographs will be hung in a permanent display at the Universityâ€™s John Galsworthy Building, in South West London.

Now renowned internationally as one of the most forward-thinking aircraft investigators, Mr King is the first to admit his pathway to success had a slightly bumpy start. Signing up to a degree in aeronautical engineering at Kingston Universityâ€™s predecessor Kingston Polytechnic, proved the turning point which set him on track to rise to the top of his industry. "Until I joined Kingston Polytechnic, as it was known in those days, courtesy of an apprenticeship with local company Hawker Siddeley Aviation, my academic achievements had failed to impress," he said. "The common assessment was usually â€˜could do betterâ€™. However, the mix of theoretical and practical training I got across a broad range of technical topics really grabbed my attention. My academic achievements improved to the point that I even exceeded my tutorsâ€™ expectations."

After working on development of the early Hawk wind tunnel testing during his apprenticeship with Hawker Siddeley Aviation, Mr King joined the Air Accidents Investigation Branch in 1972 and quickly moved up the ranks. Over the years his pioneering work examining human performance in the engineering world has led to new regulations, enhanced training and fresh approaches to improve aircraft maintenance.

Mr Kingâ€™s appearance on the Wall of Fame came about after Kingston University decided to showcase some of its most celebrated alumni. "Our research showed students and graduates were very interested to hear about predecessors who had gone on to rise to the top in their chosen careers," Dr Helen Trott, the Universityâ€™s Head of Development, said. "David is a wonderful role model for our current and future students and his experience of higher education shows how it can really make an enormous impact on helping them on the road to successful careers. The graduates we speak to today still vividly recall the pivotal role the Universityâ€™s high quality teaching played in launching their careers and the wall gives us a chance to both celebrate this strength and pay tribute to our alumniâ€™s achievements." In the longer term the University plans to expand the gallery as current students complete their degrees and make a name for themselves in their chosen fields.