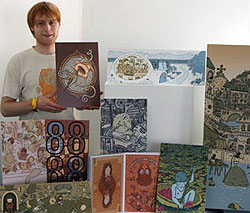 Final details of the picture books, which are aimed at three to five-year-olds, are being kept under wraps, but they will certainly feature Matthewâ€™s unusual colour choices. Being red-green colour-blind, the artist from Eastbourne, East Sussex, sees all reds and greens as shades of khaki. Far from being a disadvantage, he believes this is a real plus point. â€œMy colour-blindness is a really positive thing,â€ Matthew said. â€œPeople often say how unusual my colours are and how much they like them. Of course, the colours look completely normal to me.â€

Emma Blackburn, editorial director of picture books at Simon & Schuster, said she was looking forward to working with Matthew. â€œMatthew is a rare talent and, when we saw his work, we were all incredibly impressed,â€ she added. 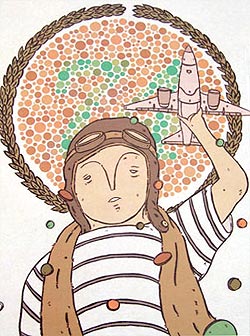 Matthew was nine when a routine test revealed he couldnâ€™t identify certain colours. â€œI can still remember the optician saying: â€˜You canâ€™t be a pilot or train driverâ€™. It was a real shock,â€ Matthew recalled. His memory of that day is reflected in one of his works, I Never Wanted To Be A Pilot Anyway, which shows a young boy in old-fashioned pilotâ€™s uniform standing in front of a colour-blind test. Luckily, he was already set on art, where his different way of viewing colours has proved to be an asset.

Jake Abrams, principal lecturer at Kingston University, said the book deal was thoroughly deserved. â€œMatthew is a highly talented illustrator and his view on the world of colour is extraordinary,â€ Mr Abrams said. â€œPublishers have, quite simply, been astounded by his work. Getting on to the illustration course here at Kingston University is a highly competitive business – we have students from all over the world applying – but we recognised Matthewâ€™s talent the moment we saw his portfolio. Thereâ€™s no doubt that from the springboard of Kingston, he will go on to national and international success.â€

Matthew – who also won a â€˜best new bloodâ€™ award at the D&AD awards in June - has set up a website to showcase his work, and praised his lecturers at Kingston University for their inspiration and support. â€œTheyâ€™re all so enthusiastic about illustration, especially Jake Abrams, and the fact that the course puts a strong emphasis on traditional drawing skills really pays off,â€ he said. â€œLanding this book deal proves it.â€ Matthew's website can be found at www.divinepaperhouse.co.uk.