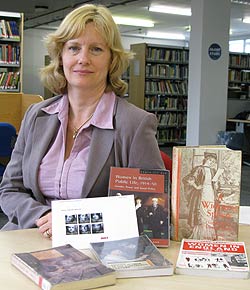 A Kingston University research fellow has played a key role in helping ensure the legacy of womenâ€™s rightsâ€™ campaigners lives on in a series of commemorative stamps. Dr Nicola Phillips, from the Faculty of Arts and Social Sciences, was one of a group of social historians approached by the Royal Mail to find the faces for its new postage collection, Women of Distinction, unveiled earlier this month.

The panel was set the challenge of identifying six women who defied discrimination to achieve a lasting influence in such traditionally male domains as politics, medicine and social reform. Head of Special Stamps at the Royal Mail Julietta Edgar said the commemorative series, which went on sale in mid-October, was commissioned to pay tribute to women whose vision and dedicated work had changed society as a whole. â€œItâ€™s easy to forget the enormous contribution women have made in key areas of our lives during the past century,â€ she said.

Being asked to select individuals whose achievements transformed the lives of fellow women was an honour but, at the same time, rather daunting, Dr Phillips, from the Universityâ€™s School of Social Sciences, said. â€œInitially, I came up with a list of possible names which was three pages long,â€ she said.

Some of the final choices, such as the inclusion of Marie Stopes, who pioneered modern methods of birth control on the 50p stamp, had proven controversial. But Dr Phillips, a former co-director of the Bedford Centre for Research into Womenâ€™s History at Royal Holloway, University of London, argued Stopesâ€™ work had a major impact on womenâ€™s lives. â€œI was involved in a debate on BBC Radio 4â€™s Womanâ€™s Hour that considered which 20th century event had made the biggest difference to womenâ€™s lives,â€ she said. â€œContraception came out on top which is one of the main reasons why I felt Marie Stopes deserved her place.â€

Other women on the stamps include Eleanor Rathbone, who campaigned for the family allowance, and politician Barbara Castle, who was responsible for the introduction of the Equal Pay Act.

Dr Phillips said she hoped the stamps would help people to remember how much had been achieved in the past 250 years. â€œIn an age where feminism has taken on some negative connotations, it is important to remember how much women today take for granted,â€ she said. â€œHaving the right to vote is now seen as normal and equal pay is a recognised right, even though there is still some way to go. What is most important is the impact of the Women of Distinction as a group and the changes that occurred as a direct result of them standing by their convictions.â€

Click here to see who the Stars of the stamps are.