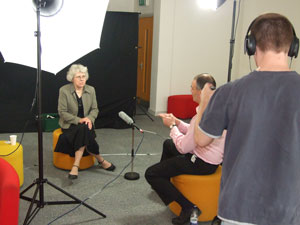 Efforts to cut carbon footprints and raise awareness about green issues at Kingston University have been put under the spotlight in a new film.  Kingston was one of five universities selected by the Higher Education Funding Council for England (HEFCE) to be featured in a mini-documentary examining how different institutions have become more environmentally friendly.

Film-makers spent a day at Kingstonâ€™s Penrhyn Road and Knights Park campuses meeting staff and students and learning about the latest green initiatives. The crew interviewed Deputy Vice-Chancellor Professor Mary Stuart about the challenges the university faces to boost its environmental credentials during the next few years. Professor Sarah Sayce, Director of the Centre for Sustainable Communities Achieved Through Professional Education (C-SCAIPE), also jumped into the hot-seat to talk about how the universityâ€™s sustainability strategy had begun at grassroots level.

The decision to highlight Kingstonâ€™s sustainability record recognised the great strides that had been made at the university so far, Professor Sayce said. â€œWe have made significant progress over the past few years, achieving Fairtrade Status as well as rolling out sustainability modules across our curriculum,â€ she said. â€œHopefully, other universities will find it useful to see the processes we have gone through at Kingston to implement green strategies.â€ 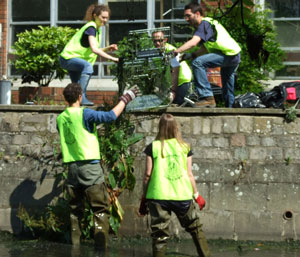 The film, which also features the universities of Bradford, Bath, the London School of Fashion and the London School of Economics, has been showcased at a series of conferences this summer and published on the HEFCE website. Joanna Simpson, a policy adviser from HEFCE, said it would continue to be used as a tool to stimulate debate among senior managers and academics discussing a sustainable development action plan for higher education institutions. â€œWe wanted to create a film to share institutionsâ€™ experiences and were impressed with the wide range of sustainable development activities at Kingston,â€ she said.