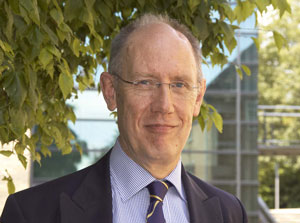 On the eve of the Labour party conference a Kingston University academic has called on the Government to shape up on its health policy. Professor of Nursing, Paul Wainwright, was speaking in the wake of a survey showing that eight out of 10 nurses were distressed by their inability to provide dignified care for patients. Professor Wainwright said that many nurses who responded to the survey had accused ministers and some NHS managers of undermining their best efforts to care for their patients with compassion and sensitivity and he urged Health Secretary Alan Johnson to end mixed sex and overcrowded wards.

The survey, commissioned by the Royal College of Nursing (RCN), gathered nursesâ€™ views on providing dignified nursing care. More than 2,000 nurses and care workers from across the UK had responded to the survey, which, for the first time, had actually canvassed the opinions of those in the front line of nursing on this issue, Professor Wainwright, who was one of the reportâ€™s authors, explained.

â€œWithin the survey 98 per cent of nurses said the dignity of their patients was important to them, but eight out of ten also said they always, or sometimes, felt upset or distressed because they could not give them the care they felt they deserved,â€ he said. Professor Wainwright, an associate dean at the Faculty of Health and Social Care Sciences, run jointly between Kingston University and St Georges, University of London, blamed the Government for many of these difficulties. He said Health Secretary Alan Johnson needed to tackle the four big issues listed as barriers to good care by the nurses who took part in the survey: mixed sex wards; inappropriate use of targets; overcrowding/lack of resources and respect for staff.

â€œMy top priority would be the abolition of mixed sex wards,â€ Professor Wainwright explained. Mr Johnson promised to end mixed sex â€œaccommodationâ€ in April at the RCN annual congress in response to a question from Professor Wainwright. â€œBut it was a typical Government fudge,â€ he said. â€œBy referring to accommodation, the Government is saying itâ€™s OK to have a mixed sex ward with separate bays for men and women. But bays provide very little privacy, and many hospitals still have mixed accommodation - itâ€™s utterly unacceptable to expect sick men and women to share a room, separated only by a flimsy curtain.â€

Professor Wainwright also called for a â€œserious rethinkâ€ on the use of NHS targets such as the maximum four hour waiting time, which he said had led to ambulances with patients in them being made to wait in hospital car parks and patients being moved from ward to ward in the middle of the night. â€œTargets are often poorly applied, inappropriate and can have an adverse effect on patients,â€ he said. 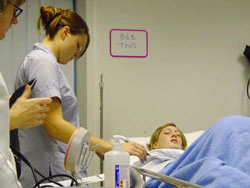 On overcrowding, Professor Wainwright said the Government should ensure that no ward was more than 85 per cent full. â€œIt is widely recognised that some wards are over 100 per cent full. In mental health units we hear of patients sleeping in day rooms on sofas. You need a bit of slack for urgent cases, to give more privacy to patients and to be able to clean the ward properly,â€ he added.

Prof Wainwrightâ€™s fourth appeal to Mr Johnson was for staff to be treated with respect. â€œThe way staff are sometimes treated by Government and management is not respectful. Staff are just as worthy of respect as patients and health service policy should never lose sight of that,â€ he explained. As an example he cited Mr Johnsonâ€™s recent comments suggesting nurses smile more. â€œItâ€™s not respectful just to say nurses should smile more. Nurses will smile when itâ€™s appropriate to smile. They are not airline cabin crew with a fixed grin, thatâ€™s not what nursing is about,â€ he complained.

Dignity in care was not just about curtains and old wards, he said. â€œIt is about attitudes, and where health policy is undermining nursesâ€™ best efforts, ministers and managers should think again,â€ he said.