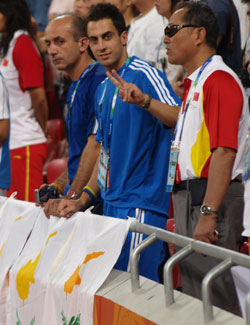 A Kingston University sports student is flying back from Beijing on a high after his first pupil won two Paralympic silver medals. Athlete Antonis Aresti was quick off the blocks to select Kingstonâ€™s Efthymios Kyprianou as his coach for the 200m and 400m, and their teamwork paid off with two podium spots.

"It's the ultimate dream of every coach just to go to the Olympics, and now we've won two silver medals," Efthymios, 25, said. â€œThis was our first Olympics and Antonis is my first athlete as a professional coach, so itâ€™s such an achievement for both of us. Now weâ€™re looking to London 2012, where our target is gold."

Antonis took silver for Cyprus in the 200m and 400m menâ€™s T46 events, running an impressive 22.15 seconds and 48.87 seconds respectively. It was a childhood accident that severed the nerves to Antonisâ€™ left arm, leaving him disabled. The pair, who are best friends, met when they were four-year-olds at school back home in Limassol, Cyprus. Itâ€™s this closeness that they believe holds the key to their Olympic success.

"Antonis spent a lot of time disagreeing with his previous coaches because he doesnâ€™t like being told what to do," Efthymios smiled. "Itâ€™s vital for him to work with someone who understands him and listens well, to bring out his best. Thatâ€™s where I come in. Being friends from childhood, we have a strong relationship. We work as friends first, rather than me making demands."

Currently studying for an MSc in sports coaching at Kingston University, Efthymios won gold himself over those distances at track events back home in Cyprus, so he knows exactly whatâ€™s involved.

"Preparing an athlete for the Olympics requires good planning and being prepared to take tough decisions for the benefit of the athlete," Efthymios said. "The first thing I learned at Kingston was how to plan and coordinate my efforts to increase my performance both as a student and as a coach." The MSc course at Kingston had given him a lot of the skills and confidence to go for it, he said. "My lecturers were truly inspirational and helped me to believe in myself," he added. 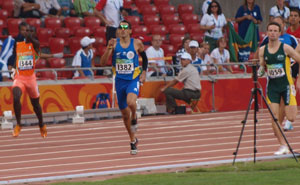 Antonis dedicated both silver medals to his three-month-old son, Alexander, and thanked his coach for all his hard work. They trained together in Cyprus during the summer prior to Beijing, but during term-time at Kingston Efthymios coached him over the internet. "You couldnâ€™t ask for more than being coached by your best friend," Antonis said. "I enjoyed every single minute of the training sessions and I am looking forward to working with Efthymios in the run up to 2012."

Athletic ability runs in Efthymiosâ€™s family – his father is a former member of the Cyprus javelin team, and his brother is a decathlete. "I aim to become a successful professional coach," Efthymios said. "Antonis and I will be going for gold at London 2012. I know he can do it."