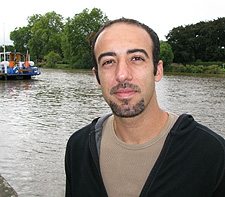 Anyone watching the recent series of the Apprentice, which included an episode when candidates were tasked with designing, advertising and selling a new brand of tissues, will have witnessed a classic example of the long-standing schism suffered within the world of advertising – between creatives on one side and business managers on the other. But that world is rapidly changing with a new MA in Creative Economy programme at Kingston University in South West London coming to the rescue with a course designed specifically for creatives who need to understand what makes business tick.

One of the first students to sign up for the new course was Mohammed Alaeddin who worked as a designer in the advertising industry for six years before deciding to go back to the books. A cultural shift was taking place in the sector, Mr Alaeddin explained. â€œThere is a big transition taking place right now in the world of advertising where the business and creative sides are coming together,â€ he said. â€œI chose this course because I wanted to learn about business as it applies in a creative setting and also because the course was based on a new model of working designed around the needs of the industry as they are right now, not how they were five or 10 years ago.â€

Course director for the MA in Creative Economy Dr Nick Wilson said the biggest strength of the programme was that it prompted students to learn experientially. â€œThey set up real companies that trade in creative products and services, so they actually learn by doing,â€ he said. â€œThe whole process, from coming up with good ideas to developing a business plan or a prototype product, calls for a high level of commitment from the participants.â€ Students learned more than just how to do something, they learned whether they had the communication skills, stamina and motivation to see the business process through, he added.

According to Dr Wilson, employers are looking for individuals who have the magical mix of technical knowledge and skills, coupled with the ability to see the bigger business picture. Two features of the new programme particularly made is stand out from the crowd, Dr Wilson said. â€œThe range of 20 subject specialisms, from advertising to music, film-making to product design is unusual, especially at Masters level,â€ he said. â€œWe are also lucky at Kingston University to have students drawn from all over the world, who contribute a diversity of creative and business backgrounds unlike anything available elsewhere.â€