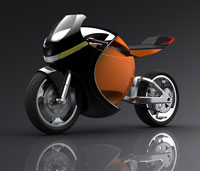 A new carbon-free racing motorbike which is set to make history will be unveiled by Kingston University engineers on Wednesday 22 April. The clean-emission, carbon-free, electronic motorcycle has been built by a team of six final-year students from the Faculty of Engineering. It is set to join 22 other bikes from America, India, Italy and Austria on the start line at the world's first zero-emissions Grand Prix in the Isle of Man this summer, part of the famous 2009 Isle of Man TTXGP. The teamâ€™s goal is to secure a podium position.

Work on the bike began last October, under the guidance of Paul Brandon, course director for motorsport and motorcycle engineering. The machine, which has gone through many designs, will run on non-fossil fuel but will still be able to clock-up an average 70 mph around the course. "Racing is great fun but thereâ€™s a serious side too – the quest to find alternatives to carbon-based fuels," Mr Brandon said. "We all need to reduce our CO2 output and this initiative is taking a huge leap in that direction. The ideas we and others put to the test on the racing circuit are the ones most likely to become commonplace on the road."

The unveiling will include an opportunity to learn about the bikeâ€™s design features from staff and students. Azhar Hussain, the founder of TTXGP motorcycle race, will also be present.