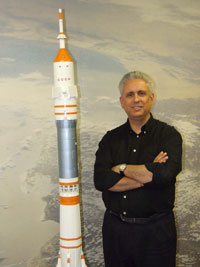 A lecturer who has helped launch the careers of hundreds of students, has now been honoured for his inspirational work promoting the understanding of space at home and abroad. Kingston University astronautics and space systems expert Dr Chris Welch has won the 2009 Sir Arthur Clarke Award for Achievement in Space Education. The awards, known as the Arthurs, are the space version of the Oscars and pay tribute to those who have worked for the advancement of space exploration.

The accolade recognises Dr Welchâ€™s work in promoting space not only to university students but to all age groups. Just recently he was talking to a class of six year olds at St Agathaâ€™s Primary School in Kingston about a space shuttle mission, while in 2004 he reached millions as an advisor on the BBC series Space Odyssey: Voyage to the Planets. This summer he is spending three weeks at the NASA Ames Research Center in California working with graduates and young space professionals to explore how space can help solve the worldâ€™s energy crisis.

"Iâ€™m very interested in how to get the space message out to a wider audience," Dr Welch said. "As well as my professional work in space engineering, I have organised, participated in and advised on a wide range of events from comedy performances and television programmes to art shows and museum exhibitions."

The winners at the Arthurs were voted for by representatives of the space industry, research institutions, universities and space-related organisations. "Nominations are sought on the basis that candidates impress, intrigue or inspire and I hope to keep on doing as many of the three as possible for my students," said Dr Welch, who has been teaching at Kingston University for 20 years. "Without their enthusiasm for space to fuel me, I wouldnâ€™t be able to fly so high."

The Arthurs awards ceremony was held on 4 April during the 2009 UK Space Conference at Charterhouse School in Godalming, Surrey.