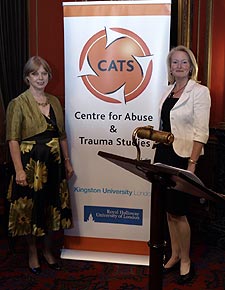 A new research centre will offer vital help in the fight against sexual abuse and other crime suffered by children, according to senior police officers, social workers and those combating internet crime.

The Centre for Abuse and Trauma Studies, a partnership between experts at Kingston University and Royal Holloway, University of London, will carry out wide ranging research into child abuse and ways to combat it.

Commander Peter Spindler, from the Metropolitan Police, said: “There has never been a more important time for the academic community to step forward and provide their perspective on the challenging world of child abuse. Professionals are so immersed in addressing the symptoms and manifestations of abuse they rarely have the time or resources to analyse the issues and tailor their response accordingly.  I am convinced CATS will be a valuable asset to this never-ending fight for the most vulnerable in society.” 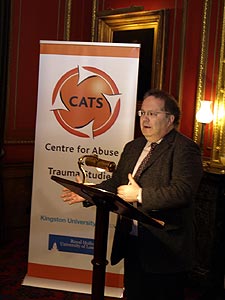 The academic research and knowledge coming out of the centre is already helping train frontline staff. Child and adolescent psychiatrist Dr Arnon Bentovim said CATS is providing support in a very complex area where workers need the best information available to make decisions. “The universal concern of all reports on children who have been failed by professionals, is the lack of assessment and analytic skills of social workers,” he said. “Together with CATS we are training social workers to use approaches based on valid, well researched methods. Instead of a tick-box approach, they are empowered to use approaches which have been demonstrated to give a holistic, accurate picture of the needs of abused children and the risks posed by parents and family members. This method helps them to intervene to protect children and to help those recovering from trauma and violence.”

CATS will also help combat child abuse images appearing on the internet by working with the Childrenâ€™s Charities Coalition on Internet Safety. “Most of the current research into internet abuse comes from America,” John Carr, chair of the coalition, said. “We really do need CATS to give us a picture about what is happening in this country, so we can tackle abuse more effectively.”

The new research centre is run by directors Professor Julia Davidson, a criminologist from Kingston University, and Professor Antonia Bifulco, a psychologist from Royal Holloway, University of London.

Kingston University Vice-Chancellor Professor Peter Scott also welcomed the new centre which was officially launched on Friday 27 March at the Reform Club in Londonâ€™s Pall Mall. “The broad area of abuse and trauma is of high public interest and extremely high public concern but there has perhaps been less research in this area than in others,” he said. “It seems extremely important that we have a well-informed research base to help inform policy-making and public opinion.”