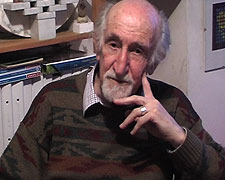 The work of an exiled Jewish artist whose paintings remained hidden for decades has been brought to the attention of the international art world by a Kingston University professor.

Ernst Eisenmayer escaped to Britain from Dachau concentration camp after fleeing his home city of Vienna when the Nazis occupied Austria in 1938. By the time he left London in 1975 he was an established artist with an extensive collection of paintings, sculpture, drawings and linocuts. However his work was largely forgotten in Britain for the next 30 years and is only now being rediscovered.

Professor Frances Lloyd, acting dean in the Faculty of Art, Design and Architecture, is leading the campaign to reintroduce the art world to Eisenmayer, now 88 and living in Vienna, who she has interviewed for a series of short films. One of the films, about his early life and work, was shown at the Ben Uri Gallery, The London Jewish Museum of Art, which featured some of Eisenmayerâ€™s works as part of an exhibition - Forced Journeys, Artists in Exile in Britain 1933-45 - which ended on April 19.

Professor Lloyd spent 12 hours over two days filming Eisenmayer and his artwork at his flat in Vienna. The footage provides an intimate portrait of the artist. â€œThe interview is important because he can provide a live voice for whole generations that have no concept of what London or Austria was like at that time,â€ said Professor Lloyd. Â

One of the most poignant moments in the interview comes when Eisenmayer tells how, in October 1938, at the age of 18, he was transported to Dachau concentration camp in southern Germany. He explains how he and his fellow passengers, marked as Jews with stamps on their heads and both cheeks, had to change trains in Munich during the rush-hour. â€œI looked around and tried to find whether anybody would show any sign of sympathy. There was no one,â€ he said. â€œAnd this is still one of my worst experiences, worse than all the insults and hitting and so on. There was not a single person that showed any sympathy or any interest. They turned away.â€

Two films have already been produced and a third is due out later this year. Professor Lloyd is researching Eisenmayerâ€™s work and is working on an exhibition to mark the artistâ€™s 90th birthday next year.

She came across Eisenmayer by chance after it turned out that one of her sons was friends with his grandson. Although the boys first met at school more than a decade ago, Professor Lloyd only learned that his grandfather was an artist a couple of years ago.

Professor Lloyd visited the artist's daughter, Jan Dawes, whose home in south London has become a showcase for his artwork. Thrilled by the â€œfabulousâ€ collection produced by Eisenmayer, who is largely self-taught, she contacted the Ben Uri Gallery which was already putting together its exhibition on émigré art. The gallery was eager to include Eisenmayer and Professor Lloyd then travelled to Vienna to film the artist. 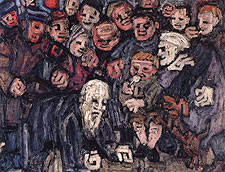 Eisenmayerâ€™s paintings and drawings show Vienna in the 1930s, Dachau, the British internment camps where he and other German speakers were held during the war, his fellow war time factory workers as well as post war London life. He was recognised as an important artist in the 50s and 60s but disappeared from public view after he left England for Italy in 1975, leaving much of his work in London.

Rachel Dickson, co-curator of the Forced Journeys exhibition, said that Professor Lloyd introduced the gallery to Eisenmayer. â€œHis extraordinary experience fitted into the theme of the exhibition and his work was the biggest aesthetic revelation, it made us go â€™wow, this is really exceptionalâ€™.â€ Describing the moment she saw Eisenmayerâ€™s work for the first time, at his daughterâ€™s house, she said: â€œIt was fantastic, a real treasure trove of work that was well presented, with sculptures in the garden and paintings that had not been seen for years.â€