Green machine gears up for the grid

Green machine gears up for the grid 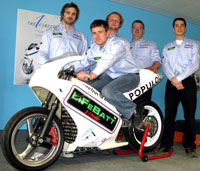 It has the ability to reach speeds of 102mph, race around a 38 mile mountainous course and is powered by batteries which can be charged from a standard household socket. Itâ€™s Kingston Universityâ€™s new, green motorbike. Designed by six final-year engineering students, the bike is set to make history by competing in the worldâ€™s first zero-emissions Grand Prix this summer. The Kingston team will join 24 eco-bikes from America, India, Italy, Germany and Austria on the start line at the 2009 Isle of Man TTXGP.

Work on the bike began last October, under the guidance of course director for motorsport and motorcycle engineering Paul Brandon. The motorbike, which has gone through many designs, will run on non-fossil fuel but will still be able to clock-up an average 70 mph around the course. "Being green doesnâ€™t have to mean slow," Mr Brandon said. "There are too many sceptics when it comes to electric vehicles but we all need to reduce our CO2 output and this initiative is taking a huge leap in that direction. The ideas we and others put to the test on the racing circuit are the ones most likely to become commonplace on the road."

The bike is run from a custom-built, 72-volt battery and the team estimates it will reach speeds of 102 at the fastest downhill section of the 38 mile course. "The energy density of batteries is far less than that of petrol or diesel so how we manage the energy we carry is critical to our success in the race," Mr Brandon added. "The bike we have designed has a whole vehicle efficiency of 90 per cent, so we are only wasting 10 per cent of what we carry. By comparison a petrol-based vehicle wastes 70 per cent of the energy it carries." 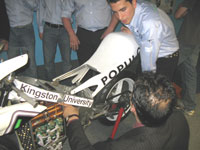 Students studying on the motorcycle engineering design course have worked on the project since October last year and it will form part of their final assessment. Alex Jones-Dellaportas, 40, originally from Oldham, Lancashire, said: "The design has gone through many different stages. Weâ€™ve refined it at each step along the way to try to make it lighter and faster and the majority of the materials we have used have been recycled." Team mate Gonzalo Carrasco, 21, originally from near Madrid, in Spain, said: "It might look similar to a normal motorbike but it has no internal combustion engine, no exhaust system and no fuel tank. The overall CO2 usage, including the CO2 generated to charge the batteries, will be around 50 per cent less CO2 than a petrol or diesel-power bike. People need to realise that this technology is the future. By entering green races and building green designs we are hoping policy-makers will see the potential for this technology and start investing in it."

Azhar Hussain, the founder of TTXGP motorcycle race, said the team's motorbike would be racing against formidable competition from around the globe on one of the most challenging road race courses in the world. "What the Kingston University team has done is extraordinary in speed and scope given the resources available. It feels like an adventure in the making," he said. "Kingston has seized the moment to be a player on the global stage. Should they succeed, then the exposure for Kingston will be priceless and will outlive the event for years to come." The bike was officially unveiled to motorcycling enthusiasts, guests, staff and students at Kingston University on Wednesday 22 April. The competition takes place on June 12.