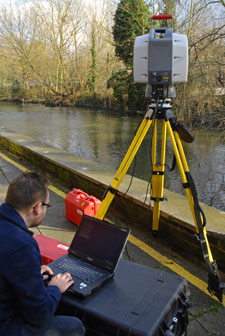 A new state-of-the-art laser scanner, which is revolutionising the way geographers, engineers, police officers, and scientists solve problems, is now transforming the problem-solving ability of students at Kingston University. Once they master the new equipment, which costs around £50,000, students in the Faculty of Science will be able to measure buildings, trees, walls and even mountains to the nearest millimetre. The students can then use the data to carry out detailed analysis and make precise calculations such as the amount of landslip on an eroded coastline.

The Leica laser scanner will be used by students studying geographical information systems (GIS), a course which combines the theories and concepts of geography with information and communication technology. Police officers, council staff and engineers taking part in the University's Professional Training Programme course will also benefit. Principal Lecturer Dr Kenneth Field, course director for GIS, said students trained to use the new equipment would be leaving Kingston with up-to-date knowledge of the latest techniques. "Our high-definition, terrestrial-laser scanner can capture around 50,000 points of data a second," he said. "It allows us to capture high-definition surveys, including the height, width and depth, of a wide range of objects from the natural and built environment. This might include modelling crime scenes, exploring the effectiveness of river channel restoration or analysing street scenes and allows us to look in fine detail to the nearest millimetre." 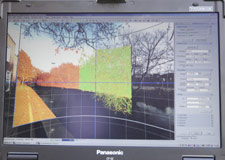 Scientists studying coastal erosion can use the laser scanner to measure even the smallest changes to the landscape, while engineers can utilise it to accurately measure the size of a hole in the ground and predict the amount of material they will need to fill it in. The laser scanner is also having an impact on the way police investigate major incidents, Dr Field explained. "Using the laser, police officers can now take an accurate 3D-record of a crime scene measuring distances between objects and this can be stored for years to come," he said. "It means in the future police officers reopening a murder inquiry will be able to see a 3D-interactive view of the crime scene which would have confronted officers years earlier."

The delivery comes as Kingston University has been recognised as one of the world's first Environmental Systems Research Institute Development Centers in Geographical Information Systems - the first outside North America. The accolade will allow staff and students greater access to the latest software and the chance to work directly with ESRI on a range of exciting initiatives. Dr Aileen Creegan, Associate Dean of the Faculty of Science, said being named as an ESRI Development Center in GIS was a major achievement for the University's School of Geography, Geology and Environmental Science. "Kingston is world renowned for its work in GIS and this award helps to cement our reputation as a leader in the field," she said. "We were the first undergraduate GIS course in the world and GIS is celebrating its 20th anniversary at the University this year."