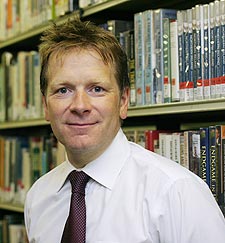 Tensions between the British and American forces due to their different approaches to war are leading to confusion for troops serving in Iraq and Afghanistan, according to a new report.

Hearts and Minds? British Counterinsurgency from Malaya to Iraq, which introduces a special issue of the Journal of Strategic Studies, states that in Iraq while the US followed  a more aggressive conventional military approach, the British sought  to win over the "hearts and minds" of the populations with minimum force – but that it is far from clear what this concept means as one soldier's interpretation of "minimum force" may be very different to another's. The situation on the ground is "highly ambiguous", according to the report.

The editor and lead author, Paul Dixon, a Reader in Politics and International Studies at Kingston University, suggests that military leaders on both sides of the Atlantic should stop viewing military operations as simply "hearts-and-minds" versus conventional warfare, and called for a full and frank debate on exactly what military actions are justifiable and in what circumstances. "This should also include discussion on the accountability of soldiers as well as their rights," Dr Dixon said. "The future may be to more carefully and practically specify in what contexts and circumstances the deployment of force is legitimate."

The concept of ‘Hearts and minds' was first used by Sir Gerald Templar when discussing Britain's counter-insurgency in Malaya (1948-60) but the report argues that the term did not accurately reflect the level of force used in the Malaya campaign and the resulting human rights abuses.

The report questions whether the concept of "hearts and minds" is currently of any practical use in operations, as it can be interpreted so widely. "To what extent is it a realistic guide to operations? Is it just a public relations device to cover the realities of war and win domestic and international support?" Dr Dixon asked. "It becomes a means of justifying current operations to a variety of audiences rather than a guide to their conduct. Domestic political and public opinion is protected from the brutal realities of counter-insurgency in order to sustain support."

Differences between the UK and the US approaches in Iraq and Afghanistan have led to what the Daily Telegraph described as "a minor crisis in Anglo-American military relations" (August 2007). The study confirms that those differences are considerable and still evident, and have led to "severe tensions" between the Allies.

Tensions between the UK and US have been evident for some years, the report says. In April 2004, General Sir Mike Jackson, then head of the British Army, distanced himself from the US approach, stating: "We must be able to fight ‘with' the Americans. That does not mean we must be able to fight ‘as' the Americans." The current head of the British Army, General Sir Richard Dannatt, has confirmed this approach, adding that "recent experience shows that this is perfectly possible". But the report highlights specific flare-ups, including the 2004 US invasion of Fallujah which it states went ahead in spite of the opposition of leading British politicians and soldiers.

"The British have been more political rather than military and have been more willing than the US to contemplate reconciliation and a negotiated settlement with the neo-Taliban in Afghanistan," Dr Dixon added. "The British continued to see such deals to hand over power to the Afghan government and security forces as the key to defeating the Taliban while this approach attracted strong criticism from the US."

In order to win the battle for "hearts and minds" the British have been reluctant to destroy the opium poppy crop in Helmand Province, the report states, until alternative forms of income can be provided to the farmers. The US, on the other hand, has pushed for the destruction of poppy fields.

"There have also been tensions between the British and US over the excessive use of force, the Geneva Conventions and the treatment of prisoners, and its attitude to US attacks in Pakistan," Dr Dixon said.

Hearts and Minds? British Counterinsurgency from Malaya to Iraq concludes by suggesting debate is needed on "Just War theory, government policies, the legitimacy of various tactics, the rules of engagement and the accountability of soldiers as well as their rights". The report is available free online.