Whether they hitch, busk or sofa surf, acclaimed graphic artist and designer Lawrence Zeegen says today's design graduates need to be prepared to "go global" to land the top jobs. Speaking prior to taking up his role as Head of Communication Design at Kingston University on 1 September, Mr Zeegen, a globetrotter on the international lecture circuit,  stressed that Kingston's existing strong international links and industry contacts give its students an advantage, and that he plans to expand these links even further. 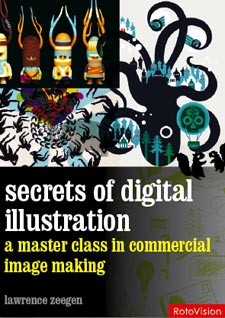 "It's tough out there in the jobs market, and students need to keep fresh, focused and forward-thinking to find the best ones  – if this means sofa-surfing to Sydney, then do it," Mr Zeegen said. "They need to make industry contacts, learn from them and get that work experience, to decide where they want to be and how they'll get there. There's no point sticking their heads in the sand and hoping the recession will come to an abrupt end. Whether it's London, New York, San Francisco or Berlin, great jobs and internships are out there for those who are willing to go for it. Kingston University's strong industry contacts and international links give our students a real edge."

Being prepared to travel the world gives graduates a wider choice of top jobs in the current economic climate, looks great on their CV and gives them "a bigger, better stab at life", he added.

A graduate of Camberwell College  of Arts and the Royal College of Art, Mr Zeegen, 45, joins Kingston from the University of Brighton where he is currently Assistant Head of School. "There is a healthy rivalry between the two institutions, and over the years I've come across many impressive design students from Kingston, so I know the incredibly high standards of work produced. Kingston's communication design is right up there at the top of the Premier league. It's a major institution in the design world. My aim is to keep that upwards trajectory going and to see how far we can take it."

Mr Zeegen is a Contributing Illustrator to The Guardian and his incisive drawings appear in the newspaper on alternate Wednesdays. He is also a frequent guest speaker at conferences across the globe, including Japan, India, Singapore and the USA, and is an accomplished author. His fourth book, What is Illustration? was published this month, and his booked have been translated into several languages. Former posts include Course Director, BA (Hons) Graphic Design, at Camberwell College of Arts, and he had worked as an illustrator throughout his academic career, appearing in a wide range of international media including the LA Times, Observer, Financial Times, Mail on Sunday's You magazine, GQ and Design Week, and working for major design, advertising and publishing companies.

"Graphic Design/Illustration is a relatively small world, so I already know many of the terrific team at Kingston," Mr Zeegen added. "The Knights Park campus is also a wonderful riverside location. What more could I ask for?"