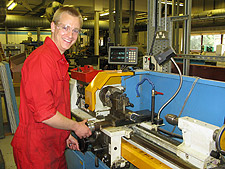 A rocket motor which can be fired safely and observed at close range has helped a Kingston University engineer secure his place in a prestigious international space competition. James Arkwright, from Morecambe in Lancashire, came up with the educational tool as part of his university degree. The 25 year old has now being asked to present his idea to experts at the International Astronautical Congress in Korea this October.

James, who has spent the past five years studying aerospace engineering and astronautics at Kingston University, in South West London, designed the 50 centimetre tall, portable motor. It will help engineering students, academics and researchers learn more about the mechanics of a rocket. Made out of graphite, steel and acrylic it shows students – from school age to degree level – how fuel burns in a rocket's combustion chamber and allows them to watch it at close quarters.

The model is known as a hybrid rocket – a type now being used vehicles intended for space tourism. It uses a gaseous oxidizer: nitrous oxide and a solid fuel: acrylic – a common household plastic. As the acrylic burns, pressure increases in the chamber to produce thrust. "It's a bit like when you turn a hosepipe on and the force pushes back on your hand," James said. "The heat inside the rocket reaches approximately 3,000 degC, so we've had to design something which can contain this heat and pass a number of safety tests."

There was still not much known about the new hybrid type of rocket, senior lecturer in aerospace engineering and astronautics Dr Barnaby Osborne said. James' design had the potential to help researchers learn how to make such rockets safer and more efficient. "Although many private companies carry out similar tests to the ones James has been doing, their results are often commercially sensitive and kept under lock and key," Dr Osborne said. "This means researchers can use it to monitor performance and analyse how different types of fuels perform," Dr Osborne added. This area of research was becoming more popular since the first privately-funded, rocket-powered aircraft Space Ship One programme, he said. "The motor will allow engineering students and researchers of the future carry out tests which ultimately have the possibility to transform rocket design." 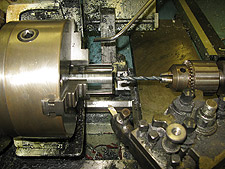 The design will also help primary school children to get involved in engineering, according to James who plans to showcase it to an audience at Kingston Grammar School. "School-aged children don't always know why engineering is so important, so it is good to be able to give them real demonstrations which help bring our work to life," he said. "Hopefully this could encourage more young children to think about a career in engineering."

James is now hoping to impress judges in Korea before pursuing a career in aerospace. "Being asked to represent the UK is a tremendous honour," he said. "The preparation for the competition has been tough, but I jumped in with both feet. I'm very excited to be showing it to the world's experts."

It is the fifth time a Kingston student has been selected to take part in the International Astronautical Congress undergraduate competition. Last year Victoria Lowe represented Kingston, before taking up a graduate-training position at the European Space Agency. Alison Gibbings, from the class of 2007, clinched silver in the competition and then went on to work on ExoMars, Europe's mission to explore the Red Planet. The trio followed Kingston student Flis Holland who took part in the competition in 2005 and Peter Rickmers who scooped the gold medal in 2004.

Dr Chris Welch, a principal lecturer in astronautics and space systems at Kingston University, said James's selection was an excellent achievement. "James has done extremely well and follows in the footsteps of Kingston graduates who have gone on to great things in aerospace," he said. "Kingston University is continuing to produce high-calibre graduates who can compete on the world stage year after year."