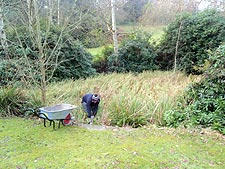 Hardy volunteers have rolled up their sleeves and cleared out an overgrown pond at Kingston University's Kingston Hill campus. The clearance, the result of collaboration between the University's Sustainability Team and the Students' Union, was organised to improve a much-loved part of the campus which had become deluged with reeds in the last few years.

The brave volunteers, made up of students, staff and local conservationists worked hard to clear over two thirds of the reeds that had dominated the pond. Many bucket loads of silt and organic matter were shifted, leaving the pond with open water once again. "The efforts of the volunteers will help significantly increase the pond's ecological value," Lynsey Stafford, biodiversity administrator at Kingston University, said. "We hope that one day we might even see the return of Great Crested Newts, which are now a protected species."

There were no sightings of any aquatic fauna during the clean-up operation which took place on Saturday 31 January, but volunteers were rewarded by witnessing a brave fox that visited the pond. With the first stage of the project successfully completed, the Sustainability Team is now looking at options for further clearing the pond of the root bed that has developed under the surface. 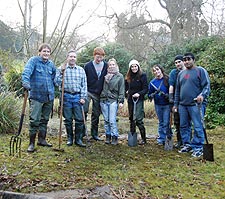 The clearance was supported by the students' union's Junction49 initiative which gives Kingston students the opportunity to set up and run projects that benefit their local community. "This clearance demonstrates how much can be achieved with a little thought and imagination," said Martin Crosby, the students' union's dedicated Junction49 worker. "It was great to see a good turn out from both students and staff here at the University, and to see them work together to get so much done."