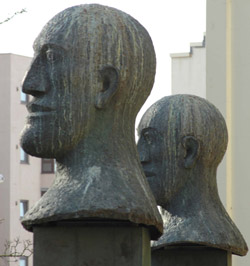 Expert evidence from a Kingston University art historian has helped ensure four modern sculptures will not disappear from public view. Professor Fran Lloyd, from Kingston University in South West London, was summoned to share her professional expertise as part of the campaign to save four bronze heads designed by the late Dame Elisabeth Frink. The case was put before Culture Minster Barbara Follett, who decided to grant the artworks a Grade II* classification – the first time a public sculpture less than 30 years old has received such official recognition.

The artworks were originally commissioned by property developers The Avon Group in 1985 to take centre stage at the new Montague Shopping Centre in Worthing, Sussex, and were officially unveiled when the complex opened in June 1990. When the developers announced plans to replace the two-metre high sculptures, known as Desert Quartet, in August 2006, the ensuing public outcry let to a campaign to save them.

Professor Lloyd, a respected art historian and Acting Dean of Kingston Universityâ€™s Faculty of Art, Design and Architecture, supported listing the sculptures to ensure they were protected for future generations. â€œWeâ€™ve been working on the bid for two years and the decision is wonderful news,â€ she said. â€œDesert Quartet marks the summation of Dame Elisabethâ€™s career and our success in getting the work listed, ensuring everyone will be able to continue to see it in the place for which it was designed, shows how academic expertise can benefit the nation.â€ 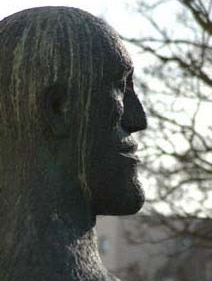 Dame Elisabeth, who was born in 1930 and died in 1993, was highly respected in international art circles, with works in a number of major collections including the Tate Modern. She was fascinated by the relationship between art and public spaces. Inspired by the Tunisian desert, Desert Quartet was her penultimate public commission, completed at a time when she was becoming increasingly frail. â€œHeads have always been very important to me as vehicles for sculpture,â€ Dame Elisabeth is recorded as saying during her career. â€œA head is infinitely variable. Itâ€™s complicated and itâ€™s extremely emotional. Everyoneâ€™s emotions are in their faces.â€

National organisations the Twentieth Century Society and The Public Monuments and Sculpture Association (PMSA) worked closely with the local Worthing Society in the campaign to save Desert Quartet. The Grade II* listing was recommended by English Heritage.