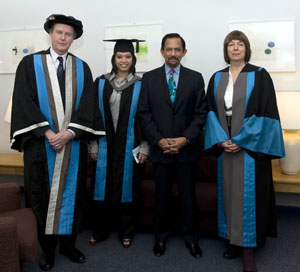 The Sultan of Brunei mingled with other proud parents at Kingston Universityâ€™s graduation ceremony yesterday (19 January) where he watched his daughter, Princess Fadzilah Bolkiah, receive her MSc (with commendation) in International Relations. The awards afternoon at Londonâ€™s Barbican Centre marked the culmination of four yearsâ€™ study for Her Royal Highness Princess Fadzilah who first came to Kingston in 2004.

After picking up a BA (Hons) in International Studies last year, the 23 year old decided to stay on at Kingston to complete her postgraduate study, exploring global politics in depth and examining the roles of the United States, the United Nations and the European Union. Princess Fadzilah said she enjoyed her undergraduate life at Kingston and was pleased she had been able to stay on for another year to hone her skills. â€œThe course was fascinating and Iâ€™ve learned a great deal about international diplomacy and global politics,â€ she said.

His Majesty Hassanal Bolkiah was one of hundreds of proud relatives who attended the ceremony where more than 1,200 students from the Faculty of Arts and Social Sciences collected their degrees. â€œKingston is renowned for its work in international relations so it was an honour to visit London and watch Fadzilah receive her award,â€ he said. â€œI know she has received exceptional tuition and benefited from a range of visiting speakers who are leaders in their field.â€

Professor Gail Cunningham, Dean of the Faculty of Arts and Social Sciences, said Princess Fadzilahâ€™s qualification would be widely respected and provide an excellent grounding for her future. â€œThe course deals with some of the most profound changes taking place today in contemporary international affairs and provides graduates with vital knowledge and skills,â€ she said. â€œAll the students who received their awards at the ceremony have put a great deal of effort into their studies and this ceremony was a chance to celebrate their achievements.â€