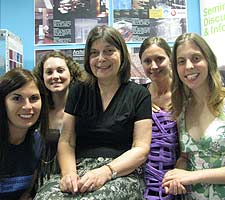 A chair made from plastic carrier bags, recycled concrete, a â€˜greenâ€™ motorbike and wall cladding made from banana plants were among the projects highlighted at the launch of Kingston Universityâ€™s Â Sustainability Hub. The University, which is already widely known for its sustainability work, aims to make a national and international impact through the work of the Hub, which will also champion sustainability degrees and research.

Nearly 150 guests attended the Hubâ€™s launch last week at the Universityâ€™s Penrhyn Road campus. Opening the event,Â  Deputy Vice-Chancellor, Professor Mary Stuart, said: â€œItâ€™s all about real world sustainability – not thinking great thoughts that will have an impact in 25 or 30 years time, itâ€™s about having an impact sooner rather than later. Thatâ€™s why the relationship between the community and ourselves is absolutely crucial and thatâ€™s why what weâ€™re doing as a University is so important.â€

Dr Ros Taylor, the Hubâ€™s Director, said the Hub would act as a focal point for all aspects of sustainability within the University and would develop local, regional, national and international links. â€œWeâ€™ll be bringing people together from different parts of the institution, to generate more cutting-edge ideas, as well as offering our services and expertise to business, community groups, schools and colleges,â€ she said.Â Â

Each of Kingstonâ€™s seven faculties was represented through exhibitions showcasing their commitment to sustainability, including development of degrees in subjects such as Engineering, Real Estate Management, Business, Law, Design and Environmental Science. 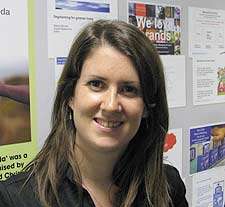 Louise Adams, 30, of Richmond, Surrey, who is working part-time while she studies for a one-year Masterâ€™s degree said that businesses were becoming increasingly aware of the need to demonstrate their commitment to sustainability and wanted their staff to be properly trained. She said she was able to put her MSc in Environmental and Earth Resource Management to good use through her work with west London based Innocent, the fruit drink and smoothie maker.

â€œTo get ahead and to be a credible corporate social responsibility professional you really do need a degree and thatâ€™s where Kingston came in – what really impressed me was how well the University was geared up for part-time students,â€ Louise explained. â€œWhatâ€™s great is that my MA is directly and immediately relevant to my job, what I learn on a Thursday I can put into practice on a Monday.â€ 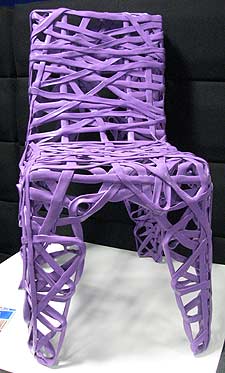 Student projects such as the Universityâ€™s new â€˜greenâ€™ motorbike which competed in the Isle of Man TT race together with research into concrete made from materials recycled from demolished buildings were on show at the Hub launch alongside products from Kingstonâ€™s Sustainable Materials Library including wall cladding made from banana plants. The School of Pharmacy and Chemistry produced a display about its research into producing drugs such as ibuprofen in a way that is less damaging to the environment. And designer Richard Liddle of Newcastle-upon-Tyne based Cohda Design, who took part in a Kingston University research project brought along a purple chair made from recycled plastic shopping bags that formed part of the research project.

The way the University is run, from the way it recycles its waste to the source of the food served in its canteens and outlets, will also come under the Hubâ€™s umbrella as well as involvement with the local community through events like river clean-ups and a new research project on older peopleâ€™s views on sustainability.Â Â

Graham McNally, Kingstonâ€™s Town Centre Manager, London Cycling Campaign and Kingston Community Furniture, which sells refurbished furniture and bicycles, were among the local groups who were at the event to support the Hubâ€™s work. The Hub also aims to extend its work further by advising local businesses on how to reduce their carbon footprint and by developing existing links with universities in Oldenburg in Germany and Cadiz in Spain as well as through the multi-national background of Kingston students.