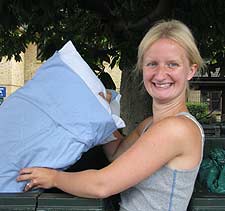 The scheme, now in its fifth year, generates around five tonnes of discarded items that would otherwise end up in landfill sites. A keyboard, a large toy dog, heated hair rollers and a couple ofÂ  plastic hula hoops were among the more unusual items that turned up among the mountains of clothes, shoes, bedding, pots and pans that have been collected this year.

Kingston University graduate Renata Rez, who has organised the scheme for the last two years, said she was particularly proud that the majority of items went to local charities.â€Weâ€™re really pleased to get the award because we work so hard to try to make sure as much as possible goes to local charities that we know and trust.â€ 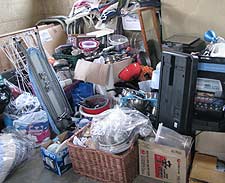 Renata, 28, originally from the town of Szeged in south-east Hungary, said the scheme had been a great opportunity to put her BSc course in Environmental Management, which she has just completed, into action. â€œMy degree is not just the geophysical sciences, waste management is very much part of it too so itâ€™s good to be able to put that into practice in such a worthwhile way.â€

Renata, who wore an evening dress discarded through the donation scheme, accepted a highly commended award alongside Hannah Smith, the universityâ€™s Sustainability Projects Co-ordinator, at a gala banquet at Imperial College London. David Lammy, the Higher Education Minister, who also attended the event, said Kingston was particularly dear to his heart because his sister Lavine studied at the university. Lavine graduated in 1999 with a degree in Urban Estate Management.Â Â

The Green Gown awards were established five years ago to find the UKâ€™s most sustainable higher and further education institutions. This yearâ€™s winning entries were drawn from 178 applications from almost 100 colleges and universities. Each entry was scrutinised by an expert panel of judges from organisations including the Carbon Trust and the Learning and Skills Council.

The judges described Kingstonâ€™s scheme as a model for other universities to follow and a shining example of a university â€œusing its own resources to create local solutionsâ€.

Each year at the end of term, the 2,500 students in Kingstonâ€™s five halls of residence as well as some students in private accommodation are asked to collect their unwanted items in plastic sacks which are put in huge wheelie bins before being distributed to charities to be resold or reused. The scheme is run by the universityâ€™s Sustainability Team and Kingston Universityâ€™s facilities management company, KUSCO, which oversees the halls of residence.