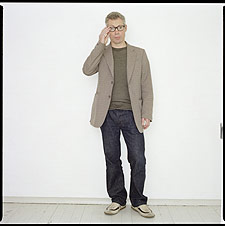 Designs by Kingston University graduates Jasper Morrison and Rosario Hurtado received top billing in an exhibition at the Indianapolis Museum of Art. The exhibition, a joint research project between the museum and Kingstonâ€™s Faculty of Art, Design and Architecture, included 250 pieces, including furniture, glassware, metalwork and ceramics, created by 118 designers from 14 countries.

Mr Morrison, now widely regarded as one of the worldâ€™s top product designers, had nine objects in the exhibition including a sofa, chairs, table, bowl and toaster. Ms Hurtadoâ€™s contribution was a chair designed by the company El Ultimo Grito, which she set up with her partner Roberto Feo in 1997.

The exhibition, European Design since 1985: Shaping the New Century, was on show between 8 March and 21 June. It was curated by Craig Miller, the museumâ€™s Curator of Design Arts and a visiting professor at Kingston University since 2002. He began work on the project five years ago and appointed Catherine McDermott, Kingstonâ€™s Professor of Design, and Penny Sparke, Kingstonâ€™s Pro Vice-Chancellor for Research and Enterprise, as international experts to help edit the collection. Workshops and lectures, a book of essays and a conference in Indianapolis accompanied the development of the exhibition. 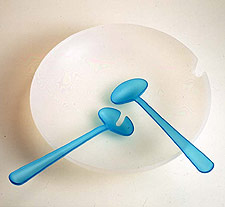 Professor McDermott said that although the exhibition had been supported by Kingston University academics, the work of its graduates had been included on their own merits. â€œSince 1985 design talent nurtured at Kingston University and its predecessors has helped to shape global design trends and movements and, in particular, Jasper Morrison has been identified as one of the most significant contemporary designers. He has become internationally famous for his simple aesthetic and he has quite simply become a super star of the design world.â€

Explaining the secrets of Kingstonâ€™s success in producing world-renowned designers, she said: â€œKingston has maintained a separate art school building for more than 100 years and in that building thereâ€™s a culture where talents are nurtured and people can be passionate and creative about their work.â€

Professor Miller said the Indianapolis exhibition had been the first comprehensive survey of western European art between 1985 and 2005. â€œOthers may have focused on particular artists but this is the first survey of contemporary western European design anywhere in the world.â€ He added: â€œJasper Morrison is one of the major designers of this period, it would have been impossible to have this exhibition without him.â€

The exhibitionâ€™s starting point in 1985 was the year when new design concepts began to emerge and the end point in 2005 marked the admission of eastern European countries to the European Union.Â

Mr Morrison graduated in design from Kingston Polytechnic Design School in 1982 and was awarded an honorary doctorate in design from Kingston University in March 2007. He is also included on Kingstonâ€™s wall of fame, which celebrates the universityâ€™s high flying alumni. His company, which has offices in London and Paris, has worked for a host of major international companies including Alessi, Canon, Rowenta, Sony, Samsung Electronics, Muji and Olivetti.

Spanish-born Ms Hurtado completed a BA in Furniture and Product Design at Kingston in 1999. Her work has recently been included in the Museum of Modern Art in New York.