It's the talk of Twitter, and now a national TV station in the US may air it on the morning show. HP – Invent, a minute-long video by Kingston University BA graphic design students Tom Wrigglesworth and Matt Robinson, was shot live and speeded up to synchronise with a dance soundtrack. You can watch the film here:

Featuring printers producing kaleidoscope-style graphics, the video was one of four projects from Kingston University to be highly commended at the recent D&AD Student Awards, placing the University in joint second place of all UK student entries, behind Central St Martins.

It took about six weeks to make and was shot live on HS video cameras, then speeded up 9000%. "Our brief was to present an idea which promotes the Hewlett Packard Workstation's ability to bring to life anything the creative mind can conceive," Matt, 22, explained. "So in our film the HP Workstation is the brain behind the operation, conducting a visual symphony in which the printers become the orchestra."

The idea came about while the pair were printing off research for another project. "We joked about how you could make the art of printing a beautiful thing, and the next minute we were driving around London emptying various Argos stores of their HP printers," 21-year-old Tom said.

Tom and Matt choreographed, directed, filmed and edited the video at the moving image suite at Kingston University. "We ended up using pretty much all the pieces of equipment they have in there, even if not as they were intended. Kenny Evans, the senior technician, justifiably winced when we were rigging up the expensive HD cameras on lighting rigs and shooting them up towards the ceiling to get the extra height," Tom said.

The pair paid special tribute to Mr Evans and graphic design and photography course director Rebecca Wright for all the support they had given them. "Rebecca was incredibly enthusiastic and motivating throughout our third year, and especially through this project," Matt added.

Ms Wright praised Tom and Matt for their hard work and said all the Kingston students' work, especially the HP film, had caused "lots of excitement" at the D&AD awards ceremony. Other students who received special commendations included: 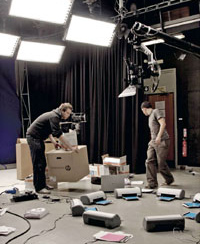 Lewis Woolner, Elliott Mariess, Laura Bowman, Jamie Breach (BA Graphic Design) and Ashley Maine (BA Graphics and Photography) who gained a commendation in the What Else Do You Do category.