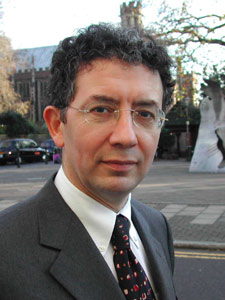 Taxpayers' money should be used to stimulate innovation rather than bailing out dying industries, according to a hard-hitting Kingston University report commissioned by Lord Mandelson's Department of Business, Innovation and Skills. The University produced the report after the government asked its advice on how to help firms - from big business to sole traders - deal with the current economic crisis.

An overhaul of the bankruptcy laws, creating a British equivalent of California's high-tech hub, Silicon Valley, and encouraging previously unconnected industries and trades to work together were among the recommendations to ministers.

A team led by Professor Robert Blackburn of the Faculty of Business and Law analysed academic studies, news articles and business publications on the credit crunch as well as consulting a specially-convened think tank of nine of the UK's most eminent business gurus including Professor Richard Whittington of Oxford's Said Business School and Professor Charles Baden-Fuller of City University's Cass Business School.

Professor Blackburn's team found that the recession was unique and unpredictable, and likely to produce "a new economic order whose precise parameters are only dimly understood today". They said the recession was overturning and revolutionising current business models, creating both threats and opportunities for companies. "Business as usual isn't an option for most companies," said Professor Blackburn.

The think-tank recommended that firms must innovate and explore new ideas as well as cutting costs to have a better chance of surviving and growing in the recession. Firms that focused only on cutting costs, dubbed corporate anorexics, might survive the recession – in spite of forcing people to work harder rather than more effectively – but fail in an upturn through a lack of resources, the think-tank warned.

The think-tank concluded that ministers could help businesses by giving financial help to innovative projects based on new ideas and ways of working rather than by subsidising existing companies, said Professor Blackburn. They felt finance should be regarded as having some form of leverage or generate a burst of new ideas or activities, rather than a subsidy to continue with existing products or services. Professor Blackburn added: "The government should focus more on supporting new business ideas rather than on propping up incumbent firms."

The report suggests that ministers could promote examples of companies that had grown stronger in previous recessions and celebrate the importance of entrepreneurs, as well as creating "innovation laboratories" where organisations could experiment on ideas outside their conventional business.

The report also calls for reform of the bankruptcy laws, which can encourage some businesses to wind up voluntarily to avoid the high-cost of bankruptcy proceedings.

The report concludes: "The key to successful government intervention does not lie in persisting with business models that were appropriate in the past or are currently under threat. Instead, successful intervention lies in breaking the frame and reinventing not just the organisation, but also the broader socio-economic political system within which business organisations operate."

A full copy of the report is available from the BERR website.

The report's authors were Professor Robert Blackburn, Professor David Smallbone and Dr John Kitching, all from Kingston University, and Sarah Dixon from the University of Bath. Although Professor Blackburn is Director of the Small Business Research Centre, the team's remit extended to big business as well as small and medium sized businesses.