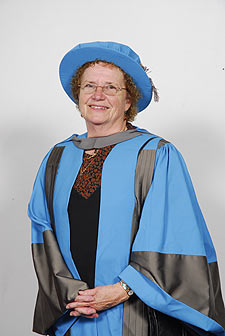 An American professor who is a legendary figure in the world of psychiatric nursing has been awarded an honorary doctorate by Kingston University and St Georgeâ€™s, University of London.

Shirley Smoyak, a professor in the Division of Continuous Education and Outreach at Rutgers University, New Jersey, has been named an Honorary Doctor of Science. The award was made by the Faculty of Health and Social Care Sciences, run jointly by Kingston and St Georgeâ€™s.

Professor Smoyak, who is also Professor of Public Health in the University of Medicine and Dentistry of New Jersey, said she was delighted to accept her first honorary degree. â€œItâ€™s a very, very wonderful experience. The highest academic accolade that anyone could have is an honorary degree. It signifies that you have passed some kind of ultimate test of your personal and academic credentials beyond your local institution, and in my case, beyond my country of origin,â€ she said.

The Facultyâ€™s Professor of Mental Health Nursing Mary Chambers nominated Professor Smoyak for an honorary degree because she was an inspirational figure and a role model for students. â€œShe has boundless energy and enthusiasm for her area of expertise and can explain complex concepts in a way that people can relate to,â€ she explained. â€œShirleyâ€™s a star, one of the figureheads of our profession.â€ 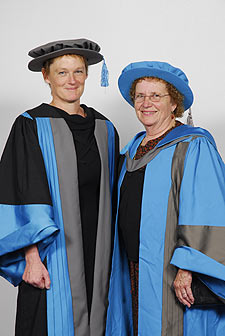 Professor Smoyakâ€™s key achievement, Professor Chambers said, was to bring a theoretical background to psychiatric nursing by developing the work of her mentor, the late Dr Hildegard Peplau. â€œTogether they have brought a critical mindset to the profession,â€ Professor Chambers explained. â€œThrough their teaching style they have given nurses a lot of confidence in their clinical abilities and their research skills. Both emphasise the â€˜give and takeâ€™ of a nurseâ€™s role, rather than a patient passively receiving care or a nurse passively carrying out a doctorâ€™s instructions.â€

Professor Smoyak has taught courses in mental health and illness, psychiatric and mental health nursing, family dynamics, health care administration, culture and health and qualitative research methods for almost 50 years at Rutgers, the eighth oldest college in the United States. Her current research projects include criminal and clinical perspectives on stalking and an analysis of state psychiatric hospitals.

She is Editor of the Journal of Psychosocial Nursing and Mental Health Services, the only monthly journal serving psychiatric nurses in clinical practice, and is the founder of the American Psychiatric Nurses' Association. In 2004, the Academy of Nursing awarded her the status of a Living Legend.

Professor Smoyakâ€™s parents were from Austria-Hungary and she grew up in a multi-cultural neighbourhood in Perth Amboy, New Jersey. Her familyâ€™s neighbours were from various European countries, and she was expected to know their languages well enough to run errands for them.

As an adult, this helped to inspire her focus on cultural sensitivity, which has included work with American Indian tribes in the south west of the United States. She has also worked in El Paso, a border town in Texas, where she taught first generation Mexicans, black students with families in the military, and older white women returning to study.