Fashion studentâ€™s new clothes are fit for an emperor

Fashion studentâ€™s new clothes are fit for an emperor 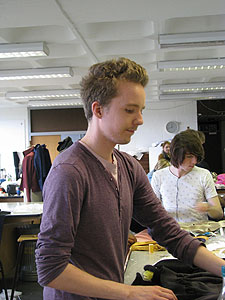 The story behind Kingston University fashion student, Alexander Jamesâ€™s latest clothing range is quite literally a fairtytale.Â  Alexanderâ€™s vision was to create a collection that provided an antidote to the current gloom and doom of recession, and would feature statement pieces in a range of luxury fabrics and voluptuous shapes. For his research, he buried his head in childrenâ€™s stories until his inspiration arrived in the form of an 18th Century fairy story, The Emperorâ€™s New Clothes by young bookwormâ€™s favourite, Hans Christian Anderson.

The story of the vain emperor who is tricked into believing he is wearing invisible clothes when he is actually completely naked, sparked 22-year-old Alexander into thinking more about the concepts of dressing the human body stripped bare, coupled with the opulence of the clothes that an oriental emperor might have worn.Â

Sourcing high-end fabrics in Venetian wool, cashmere, silks and satins, Alexander put together a collection of structured jackets and fine knitwear.Â  â€œBy exploring the effects that light and shadow cast on the naked torso, I created fine knits that are almost like a second skin with trompe lâ€™oeil pockets,â€ he said.Â  â€œIâ€™ve tried to push the boundaries of fashion by playing with volume, drapes and pleating but have kept the collection masculine by adding French cuffs and tailored collars.â€

The fashion world very nearly missed out on Alexanderâ€™s talents.Â  Originally intending to pursue a career in graphic design, it was only while he was completing a foundation course in his home town of Bournemouth, that he started learning about fashion and textiles and realised this was his true calling.Â  â€œI saw some of the studentâ€™s work at one of Kingstonâ€™s open days and was inspired to be part of the course,â€ Alexander said.Â  Itâ€™s a decision he hasnâ€™t looked back on since. â€œKingston places a strong emphasis on technical training which has allowed me to develop traditional design techniques that are so important in my garments, like hand-finishing, but thereâ€™s also been room to take designs in my own direction,â€ he said.

His new collection is Alexanderâ€™s biggest project to date and heâ€™s now looking forward to seeing his designs come to life on the catwalk for the first time at the Kingston University Fashion Show this weekend.Â  â€œIâ€™ve tried to produce the best collection I can and adapted my clothes to make them marketable as possible,â€ he said.

Kingston University lecturer Satyenkumar Patel said that Alexanderâ€™s quiet and unassuming personality completely belied his natural talent as a designer. â€œThis is an incredibly eye-catching collection and demonstrates bold design techniques and a rich fusion of fabrics, enhanced by a phenomenal attention to tailoring and finishing, which is sure to appeal to the high-end menswear market,â€ Mr Patel said.

Alexander now has his heart set on one of the sought-after places on the Royal College of Artâ€™s postgraduate fashion course. Longer-term he has his eye on the European fashion market and hopes he can build up his industry experience working for an established design house, possibly in Paris. â€œThereâ€™s still some way to go, but my end goal would be to design clothes for my own label,â€ Alexander said.