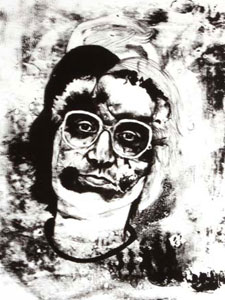 Illustrator Alice Moloney, 21, found herself behind bars at Wandsworth Prison while researching her project, Criminals, on show next week as part of Kingston University's 2009 Undergraduate Degree Show for the Faculty of Art, Design and Architecture.

After discovering original 1940s police mugshots in a New York flea market, Alice decided she wanted to draw the human face of offenders – and to do so she needed to come face-to-face with some of those at Her Majesty's Pleasure. She contacted staff at HMP Wandsworth, who were only too happy to help.

"The staff and inmates at HMP Wandsworth were extremely friendly, but I admit it was quite daunting being shown round his cell by one of the offenders, " Alice, from Tring, Hertfordshire, said. "I wanted to capture the humanity of prisoners in my illustrations, rather than showing them as people to be feared." Alice also spent time with police officers, and her resulting illustrations on a series of suspended Perspex sheets, capture notorious criminals such as Rose West, plus the faces of anonymous prisoners.

Alice's Criminals collection will be on show to the public from 7-12 June at One Off, held at Kingston University's Knights Park campus. From fine art to film-making, illustration to interiors, the show will feature the cutting-edge work of the new generation of artists and designers. The campus will throw open its doors so visitors can mingle with the art and design stars of tomorrow, many of whom will be on hand to discuss their work and the creative thinking behind it. Admission is free.

Dr Simon Ofield-Kerr, Dean of the Faculty of Art, Design and Architecture, said that One Off would be "an opportunity for everyone to get an exciting insight into the creative thinking of this new generation, to see their work and to meet our remarkable students". 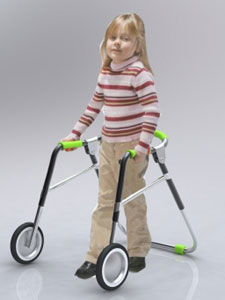 Among the hundreds of other artworks and designs on display is an innovative, toy-like paediatric walking frame for disabled children by Daniel Rawlings, which can fold and attach to a wheelchair, and Slyde Table by Nina Mueller, 22, a student from Germany, who took her inspiration from clutter on kitchen tables. Nina devised an easy-to-use sliding tabletop so that rather than having to clear clutter to make space to eat, a smart, clean work surface could slide over the top. "With more people working from home, the table could prove an ideal solution for the challenges faced by parents juggling careers and families," Nina, who is about to graduate with a BA Hons in Product and Furniture Design, said. Landscape architecture projects include environmentally-friendly planters made from old car tyres, and a ground-level garden trampoline hidden under Astroturf.

With past pupils such as international architect David Chipperfield and designer Jasper Morrison, this year's graduates have a lot to live up to, but have succeeded with flying colours, according to Dr Ofield-Kerr. "Over the years we have produced many of the world's leading creative practitioners, who have gone on to shape new thinking and new work across the globe, and the 2009 finalists will be no exception," he said. "The very special character of art, design and architecture at Kingston University shows that our students understand their work in an international context, are ready to challenge conventions and to shape and improve the world."