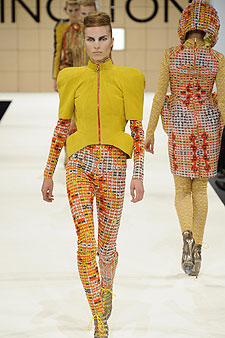 The economic downturn could lead to boom times for the high-end fashion industry while heralding the demise of celebrity-inspired chic, according to a leading industry expert. Elinor Renfrew, Head of the Fashion Department at Kingston University in South West London, believes the global recession is about to spawn a new movement of talented young designers who will soon be making waves in the marketplace, tailoring their skills to more style-conscious and discerning consumers.

Speaking at Kingston Universityâ€™s annual Fashion Show – one of the major features of this yearâ€™s Graduate Fashion Week programme – Mrs Renfrew predicted the days of budget High Street fashion were numbered. As the nation emerged from the financial doldrums, it was inevitable people would think far more carefully about what they spent their money on, she said. That would not, however, mean they would continue to opt for a wardrobe crammed with low-cost, throw-away outfits. â€œWhere once people might have bought a car or made another similarly major purchase, theyâ€™ll now think twice about such significant spending and take account of other factors such as the impact of their carbon footprint,â€ Mrs Renfrew explained. â€œWhat they are much more likely to consider instead is investing in key items of clothing that, while expensive in their own right, will not require such a major financial outlay and be both durable and distinctive.â€ 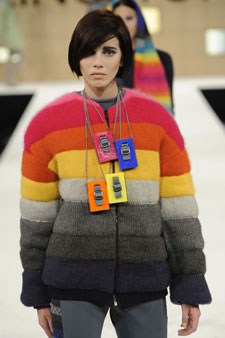 Shoppersâ€™ more astute attitude to fashion would be an enormous boost for the upper end of the fashion market, Mrs Renfrew said. However it would not bode as well for chains and superstores specialising in low-cost, mass produced garments. â€œThe bubble has definitely burst for High Street fashion – cheap, celebrity-driven trends simply arenâ€™t going to be relevant any more,â€ Mrs Renfrew said. â€œThe days of easy money are gone. People are reassessing and re-evaluating their lives and theyâ€™ll be looking for quality products with a true sense of identity.â€

Despite the fashion sector taking something of a battering during the recession, students should not shy away from aspiring to become designers, Mrs Renfrew advised. â€œItâ€™s true that retailers, stylists and the public relations side of the industry have gone through a particularly difficult period during the past year, but talented young designers are always going to be at the core of the industry,â€ she said. The sector had weathered similar storms in the past and emerged all the stronger for the experience, she added. â€œItâ€™s a well-documented fact that the most influential design often emerges out of times of recession. Vivienne Westwood revolutionised British fashion as the economy bounced back after a downturn in the late 1960s, while the Belgian-based Antwerp Six and designers such as Marc Jacobs revitalised the fashion world following the slump of the 1980s.â€

Although recruiters were definitely being more selective, employers were still keen to hire students from such high-calibre institutions as Kingston University, Mrs Renfrew added. The 24 Kingston third years handpicked to unveil their catwalk collections at Graduate Fashion Week this Sunday (June 7) were already in demand, with job offers from such labels as Max Mara and John Smedley. â€œTheyâ€™ve been extremely creative and resourceful as theyâ€™ve developed their collections and their work is both thoughtful and sensitive while at the same time full of a subtle energy,â€ she said. â€œItâ€™s enormously exciting for us to see how they have drawn from whatâ€™s happening in the world around them and to know that they are likely to be at the very forefront of the next big movement in the fashion industry.â€ 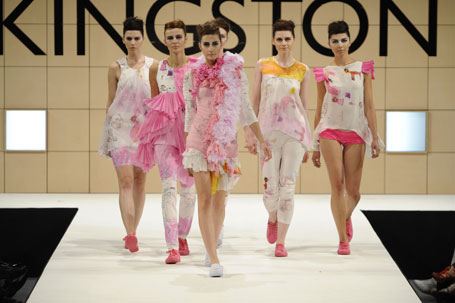