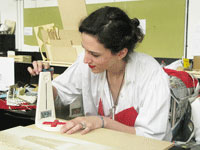 Anyone who isnâ€™t an early riser knows that stumbling out of bed in the morning is often far from fun. Third year Kingston University student Alex Mata could soon be coming to the rescue of bleary-eyed householders though – using a fairground favourite to inject a little humour into the first few minutes of the day.

The 21 year old has conjured up an alarm clock that banishes that wistful longing for just five minutes more in bed into a 'test your strength' challenge based on the ever-popular sideshow attraction. The harder a person hits the alarm clock, the more snooze is given. Hit it too forcefully, however, and the only prize on offer will be an even louder alarm call.

"The design is less tacky than the fairground attraction and more sophisticated. At the same time, I wanted it to say 'hit me' and that meant it couldnâ€™t look too delicate," Alex explained. She believes her concept could be the perfect bedroom accessory for young professionals in their mid-twenties. â€œI wanted to come up with a spirited and youthful design that encouraged people to play more with the technology that is all around them," she said.

Born in Barcelona, Alex studied art and design for her baccalaureate. â€œWhen I decided I wanted to do a design degree my father was insistent I came to London to study – Iâ€™m sure itâ€™s what he would have done if he had been given the opportunity. The whole family was so excited for me to be here, and the experience Iâ€™ve had at Kingston University has really helped develop my creative outlook,â€ she said. 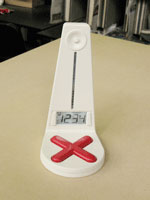 Alex draws much of her inspiration from simple designs that offer a quirky twist on a traditional idea. â€œI love it when you look at a new design, and itâ€™s so ingenious you just know straight away what the product will do for you,â€ she said.

Alex is keen to include an element of surprise into her designs. â€œI studied the way I interacted with technology and found I was dissatisfied with many of the experiences I had. That made me even more determined to take the positive traits of technological advances and add in some fun and physical interaction for the user, making machines connect better with everyday life,â€ Alex said. â€œI think devising the alarm clock must be my favourite project – although it doesnâ€™t feel like that right now amid all this last-minute work ahead of the University Design Show – but I just love the detail and the way such a traditional object can be adapted and turned into something thatâ€™s much more fun.â€

Although Alex has had more than her fair share of early wake-up calls getting everything ready for the Kingston University undergraduate degree show that launches at the weekend, she has already had a couple of job interviews and is beginning to get excited about her future design career. â€œIâ€™m still deciding whether to stay in London or follow up on a potential opportunity in Milan. Itâ€™s such an exciting time, seeing all our hard work coming together. I just canâ€™t wait to see the show and catch up on what everyone else has been working on,â€ she said.

A prototype of Alexâ€™s alarm clock, which will eventually be made out of TPE rubber, will be on display at the undergraduate show at the Universityâ€™s Knights Park Campus. She hopes to have a working version ready in time for New Designers – the premier show for graduates from across the United Kingdom – in July. Alex, and her Kingston course mates, will also be exhibiting their work at the London Design Festival in September.