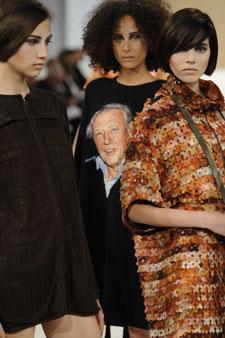 He may not be known as the face of fashion, but David Attenborough has found himself gracing the runway on the launch day of this yearâ€™s Graduate Fashion Week. Not literally, of course, but his role as a â€˜national treasureâ€™ inspired up-and-coming Kingston University designer Grace Melville to create a knitted dress featuring a stunning, larger-than-life cross stitch of the countryâ€™s best-loved naturalist.

The work of art, which took four months to produce, formed part of Graceâ€™s collection â€˜National Treasuresâ€™ and all 48 colours used to create Professor Attenboroughâ€™s face in cross-stitch were reflected in her other garments. She chose the broadcaster and naturalist – who received an Honorary Doctorate from Kingston University last year – to be the face of her collection as she felt he â€œcaptured the essence of all things Britishâ€.

Inspiration came as she was driving through the Gloucestershire countryside. â€œI saw a group of ramblers, so I jumped out of the car and asked if I could photograph them,â€ Grace, 22, of Cheltenham, said. â€œLuckily they were happy to pose and fascinated by my ideas. It struck me that the traditional English Lady, just like the Queen in her twin-set-and-pearls, often swaps these for big headscarves and hiking gear during brisk country walks. I wanted to celebrate this, and the beauty of nature, in my designs.â€

After photographing the walkers – who turned out to be from the Dursley Rambling Club – Grace arranged to join them on a six-mile trek in the Cotswolds, so she could understand more about the people and their inspirations. Specialising in knitwear, her collection includes garments which appear to be traditional dresses and capes from the front, but have backpacks built into them at the rear, showing the two faces of the English Lady. To reflect her love of wildlife, one garment features an owl perched on the shoulder. Her David Attenborough dress is fitted with long straps on the back suggestive of a rucksack. 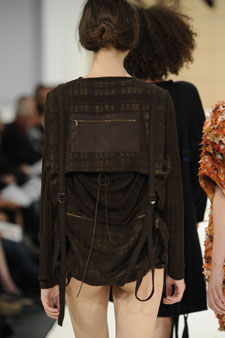 â€œIâ€™ve loved cross stitch since my mother taught it to me when I was small and David Attenborough is one of my heroes,â€ Grace added. â€œSince starting my fashion design course at Kingston University, Iâ€™ve learned so much and discovered a passion for knitwear. The University has such great links with the fashion industry and so many contacts that itâ€™s been a wonderful career step for me.â€

As part of her course, Grace was chosen to spend two months in New York with Brooks Brothers, where she joined the knitwear design team. â€œThey threw me straight in at the deep end and asked me to design a costume based on their heritage. I created a period, knitted swim costume with a bell-shaped naval jacket. It was an amazing experience,â€ she said.

Grace hopes to land a job designing high-end High Street fashion and also has another ambition. â€œI hope that somehow David Attenborough gets to see my dress and feels Iâ€™ve done him proud.â€ 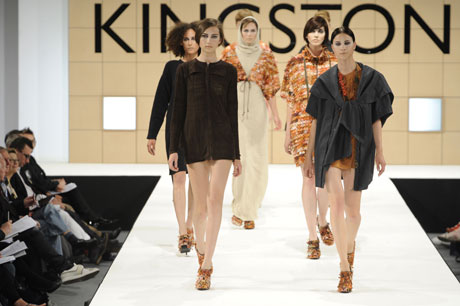