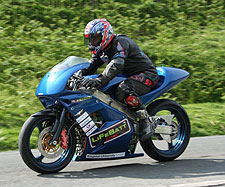 The finishing touches are being made to Kingston Universityâ€™s revolutionary electric motorbike as it gears up to take-on the worldâ€™s most advanced green racing vehicles. A team of six final-year engineering students are entering their bike, known as the Firstest, in this Fridayâ€™s (12 June) first zero-emissions Grand Prix, part of the Isle of Man TTXGP. It will be joined on the starting grid by bikes from America, India, Italy, Germany and Austria.

Paul Brandon, course director for motorcycle engineering, said the Kingston team was happy with the final tweaks they had made and confident the bike would perform well. Rider George Spence has spent the past few days riding the bike, which is powered by batteries and able to reach speeds up to 102 mph, on the Isle of Man.

â€œThe first test on the Jurby track, in the Isle of Man, was a nerve-wracking experience,â€ Mr Brandon said. â€œBut the bike performed well and we think we have a genuine chance of being on the podium, hopefully even the top step. We have been ironing out minor problems during testing which is all part of the process when you have such a short time to build a bike, but preparations are going well. The opposition are visibly worried about the Kingston entry.â€

Motorcycle engineering students Dean Goldsmith, Alex Jones-Dellaportas, Gonzalo Carrasco, Michael Payne, Sean Whittaker and Drew Corbin, who have built the bike as part of their university course, are now keeping their fingers crossed. â€œWe have been out to race tracks to monitor the bikeâ€™s performance and make final changes,â€ said Dean, 27, from Ipswich. â€œItâ€™s been a real learning curve.â€

The Kingston team will travel to the Isle of Man for the race along with supporters, friends and family. The race is the culmination of months of hard work. The team began building the bike last October. It will run from a custom-built, 72-volt battery and wastes only 10 per cent of the energy it carries compared to a petrol-based vehicle which wastes 70 per cent. The overall CO2 used by the bike, including the CO2 generated to charge the batteries, will be around 50 per cent less than a petrol or diesel-power bike.