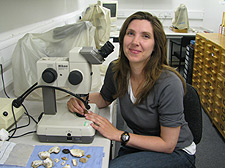 A prehistoric complex including two 6,000-year-old tombs representing some of the earliest monuments built in Britain has been discovered by a team led by a Kingston University archaeologist.

Dr Helen Wickstead and her colleagues were stunned and delighted to find the previously undiscovered Neolithic tombs, also known as long barrows at a site at Damerham, Hampshire.

Some artefacts, including fragments of pottery and flint and stone tools, have already been recovered and later in the summer a team of volunteers will make a systematic survey of the site, recovering and recording any artefacts that have been brought to the surface by ploughing.

Dr Wickstead said that further work would help to reveal more about the Neolithic era. â€œWe hope that scientific methods will allow us to record these sites before they are completely erodedâ€, she said. â€œIf we can excavate, weâ€™ll be able to say a lot more about Neolithic people in that area and find out things like who was buried there, what kinds of lives they led, and what the environment was like six thousand years ago.â€ 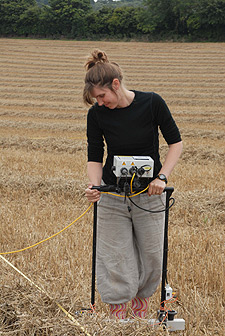 She said the find was particularly rare because it was close to Cranborne Chase, one of the most thoroughly researched prehistoric areas in Europe. â€œI was really excited. Itâ€™s rare to find sites of this kind and the tombs are likely to be of national importance,â€ said Dr Wickstead. â€Whatâ€™s really extraordinary is the location – itâ€™s one of the most famous prehistoric landscapes, a mecca for prehistorians, and you would have thought the archaeological world would have gone over it with a fine tooth comb.â€

Dr Wickstead, a visiting researcher in the Faculty of Science, is also project manager of Damerham Archaeology Project, an educational body set up last year to discover more about the archaeology of the area around Damerham village.

The importance of the site at Damerham first emerged in 2003 when English Heritage spotted crop marks – which can indicate buried archaeological sites - on aerial photographs of the area. Dr Wickstead volunteered to begin geophysical tests of the area and it was while her team was planning the work that Martyn Barber, a member of the Damerham Archaeology Project, looked at a Google map of the area to find the car park where he was due to meet his colleagues and was astonished to see yet another tomb a few hundred metres from the first. â€œTo find any new monuments of this date still visible as humps on the ground is unusual,â€ said Dr Wickstead, â€œBut to find two is fantastic – we were flabbergasted.â€

Work on the site is in its early stages but Dr Wickstead said the tombs may contain human bones, while nearby there are cropmark traces of some larger circular enclosures which may have been built at the same time as the prehistoric monument at Stonehenge, which is 15 miles away.

In Neolithic times, a ritual burial involved leaving a body out so the flesh would decay. Some of the bones were later put in a tomb, or relatives may even have kept some bones as a special talisman. â€We donâ€™t know whether these sites contained chambers with bones in them - some long barrows never contained bones at all, rather like cenotaphs today. We may also find that any chambers have been destroyed by ploughing – only by excavating could we find out for sure,â€ said Dr Wickstead.

She said her team were sensitive to the emotions stirred by discovering human remains. â€œThe recovery of ancient human remains is always handled sensitively,â€ said Dr Wickstead. â€œWe feel respect for the dead people we study, and we treat their remains with care.â€