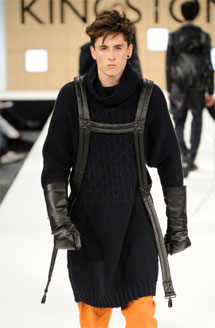 Toy parachutes and doll-sized wetsuits might not be the first items that spring to mind when thinking about menâ€™s fashion. But when fashion designer Stephanie Pither was creating her latest collection, it was a box of assorted Action Man toy soldier accessories from the 1970s and 80s that gave her inspiration.

"I loved Action Man when I was little," Stephanie, 22, of Wimbledon, said. "Barbie seemed so boring in comparison – she had a few dresses while Action Man was a real hero, with outfits for every occasion, plus exciting extras such as binoculars, oxygen canisters and rubber hands that gripped. My grandparents in Hertfordshire had a box of Action Man toys which my dad and older cousins had played with and each time we visited I spent hours poring over it."

Unfortunately the box had long since been donated to the charity shop, but Stephanie found a crate of assorted of Action Man accessories for sale on ebay to help in her research. With production of the 1970s mass-market boysâ€™ toy – famed for his Eagle Eyes which swivelled thanks to a switch in the back of his head – ending a few years ago, memorabilia is much sought-after, so the bidding shot up and Stephanie ended up paying Â£40 for it. "I had no idea what would be inside," she said. "But it proved to be a treasure trove, with sleeping bags, ladders, toy body parts, orange parachutes and even Action Manâ€™s dog."

She took inspiration from the accessories and outfits, and her collection features plenty of Action Manâ€™s trademark black and orange, plus parachute harnesses, military-style pockets and large zips as used on scuba gear. "I mixed up all the styles, so that each garment reflected all the different faces of Action Man, rather than pigeonholing him as a soldier or a diver, for example," Stephanie added. "There was also a huge oversized jumper for him in the box, which I guess someoneâ€™s granny had thoughtfully knitted to be as small as possible, so I included a man-size version mixed with leather parachute straps in my collection too." 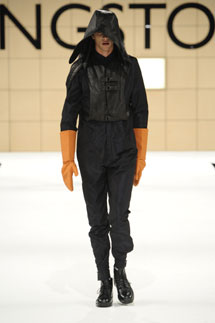 Creating the collection took six months "working all day, every day", but it was all worthwhile when Stephanie saw her designs on the runway at Graduate Fashion Week and received high praise from guests, especially men. It proved unexpectedly timely as last month a toy firm joined forces with the Ministry of Defence to launch a range of Action Man-type figures based on the British armed forces.

Andrew Ibi, Kingston University fashion lecturer and owner of the Convenience Store boutique in Londonâ€™s Notting Hill, said that Stephanie was a very strong casual/sportwear designer. "Her use of colour in this instance was restrained and restricted to splashes of bright orange against darks, creating an authentic and masculine look. As a prolific and holistic designer, Stephanie was also able to create the signature Action Man accessories which brought her whole collection to life. Hard working and detail focused, I can see a bright future career for her in casual/performance sport fashion design."

Stephanie thanked Andrew and all her Kingston University lecturers, particularly Satyenkumar Patel, for their support over the past three years. "Satyenkumar was wonderful, he was harsh at times but fair and always enthusiastic, which was exactly what I needed. Fashion design is a competitive place and at Kingston I learned that to survive in the business youâ€™ve got to really want to make it."

Collections unveiled by Kingston University students during Graduate Fashion Week have been making headlines around the globe. One of the youngest members of the press pack to attend this yearâ€™s Kingston University Fashion Show was budding journalist and designer Talya Riggs. Click here to read more about her impressions of all the action on the catwalk.