The world of showbiz royalty revealed

The world of showbiz royalty revealed 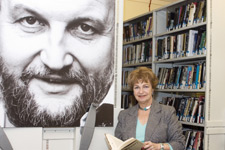 His address book was a Whoâ€™s Who of the film and theatre world - with Laurence Olivier, John Gielgud, Marlene Dietrich and Noel Coward among the many household names who were his personal friends. During his lifetime, author, critic and broadcaster Sheridan Morley amassed a library of books, personal letters, cards, and memorabilia from showbiz royalty – enough to fill 90 crates. Now one of the most important private theatre and film collections of the 20th century will be made available to the public by Kingston University, thanks to a donation by his widow, author, critic and broadcaster Ruth Leon.

Born in Ascot, Berkshire, Morley spent part of his childhood in Hollywood and grew up immersed in the world of theatre before going up to Oxford. The Redgrave children were great friends and Joanna Lumley a distant cousin. In addition to writing more than 30 books, Morley worked as a critic for many national newspapers, presented radio and television shows – including Radio 4â€™s Kaleidoscope and the Radio 2 Arts Programme – and appeared on game shows such as Call My Bluff and Countdown. First Noel Coward and then Gielgud chose him to write their revealing authorised biographies and, with his wife, he also wrote books about Marilyn Monroe, Gene Kelly and Judy Garland amongst many others.

After her husband died in 2007, Ruth decided the library needed a new home, and felt strongly that the collection should be kept together and available to everyone. She began discussions with top UK and US institutions including Juilliard and Yale, but settled on Kingston after being shown around by Sir Peter Hall, the Chancellor. â€œEveryone from actors to school children used to come to our house to use the library. If you wanted a book and couldnâ€™t find it in your library you went to Ruth and Sheridanâ€™s because the chances were we had the book, some pretty good coffee and the chance of having a good gossip too.

When I decided to donate the library to a university I didnâ€™t want it to be hidden away but to be used, just as it was in our house.â€ Kingston seemed like the ideal place. â€œSheridan would have liked the liveliness, the fact itâ€™s a new university and that people come here from all over the world, so the knowledge they gain is spread far and wide,â€ Ruth added. 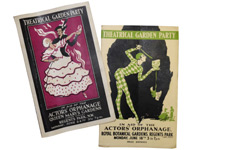 Known as The Sheridan Morley Theatre Collection, the archive will be housed in the Universityâ€™s Learning Resources Centre at the Penrhyn Road campus. Students, academics and members of the public will be able to access more than 4,000 books on theatre, film and performance, many signed by actors or authors – including Ginger Rogers. Hundreds of letters from the theatre and writing world including Laurence Olivier, Richard Attenborough, Daphne Du Maurier, Melvyn Bragg, Iris Murdoch, Vanessa Redgrave and Tony Britton will also be housed in the collection. Other items of interest include scrapbooks, magazines and theatre programmes.

Among the many highlights giving an insight into the behind-the-scenes world of stage and screen are gossipy letters from Gielgud, often commenting on his fellow actorsâ€™ talents – or rather, their lack of them. There are many letters from Sheridanâ€™s father, actor Robert Morley, including one written while he was working with Alfred Hitchcock, whom he describes as â€œa highly nervous, umbrage-taking neurotic, who picks an opponent at the outset...and keeps firing at him wildlyâ€. Marlene Dietrich wrote to thank Morley for a review, adding: â€œI had photostats made and sent them to all the intelligent people I know.â€

Other fascinating items of memorabilia include a programme for a charity fete for the Actorsâ€™ Orphanage Fund showing Vivien Leigh on the cigarette stand, Maurice Chevalier selling ice cream and Laurence Olivier running the game of chance, and a school report which states the 13-year-old Morley could â€œearn his living by writingâ€. There is also a scale model of a stage set of a 1997 production of Noel and Gertie, a play devised by Morley as a tribute to Noel Coward and Gertrude Lawrence. 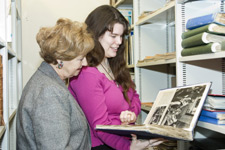 Professor Gail Cunningham, Dean of the Faculty of Arts and Social Sciences at Kingston University, described the collection as one of the most important film and theatre archives in private hands. â€œIt adds insight into the lives of virtually every significant theatrical figure of the twentieth century and is a superb resource that will benefit researchers everywhere, from international experts to students and the general public,â€ Professor Cunningham said. â€œWe are thrilled and privileged to have this wonderful collection at Kingston University.â€

The Sheridan Morley Theatre Collection will be officially launched with a VIP reception on July 6 and will available free of charge for everyone to visit from July 7. The archives will be open on a drop-in basis on July 7, 8 and 9 between 11.00am and 3.00pm, and thereafter by calling Katie Giles on 020 8417 7054 or emailing archives@kingston.ac.uk to arrange a visit. To view the archive online, please click here.