Home > News > News articles > The sword in the Rose

The sword in the Rose

The sword in the Rose 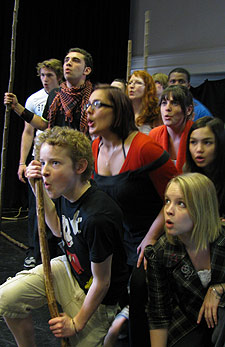 Giant puppets and magic flying swords will take the stage at the Rose Theatre next month when Kingston University students past and present join local schoolchildren in a production of Pendragon, as part of the first International Youth Arts Festival.

Co-written and co-directed by the Universityâ€™s Head of Performance and Screen Studies, Frank Whately, Pendragon tells the story of King Arthur and his Knights of the Round Table through music, poetry, puppetry, mine and magic. It charts Arthurâ€™s childhood with Merlin, his loves and losses and his redemption. The 40-strong cast comprises Kingston University graduates, current students and local schoolchildren aged from 11-26. It marks a revival of the play which was first performed in 1994 and won critical acclaim around the world with performances at the Edinburgh Festival, in the West End, Taiwan, Hong Kong and on New Yorkâ€™s Broadway.

â€œI came up with the idea for Pendragon after doing an improvisation with 30 young people based on Chaucerâ€™s Wife of Bathâ€™s Tale,â€ Mr Whately said. â€œWe had so much fun producing the piece of musical theatre, and afterwards, lying on a beach in Cornwall and later in a pub in Dulwich, we dreamed up Pendragon. Itâ€™s full of human love and loss, comedy, pathos and power and it has been wonderful to bring together this wide age-range of talented young people and to re-create and update the production.â€

The cast will be hoping to follow in the footsteps of those in the original Pendragon such as actor Tom Chambers, winner of the latest series of Strictly Come Dancing with his dance partner, Camilla Dallerup. Another original cast member, Sally Hawkins, recently won a Golden Globe for best actress for her role in Mike Leighâ€™s movie Happy-Go-Lucky. 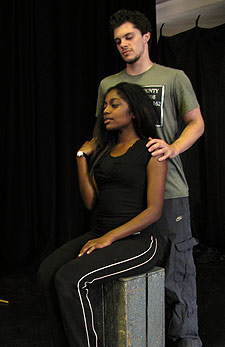 Patrick Oldham, who has just completed his first year of a BA in Drama and Film Studies at Kingston University, plays Sir Malaigaunce, a villain who lusts after Guinevere and betrays Arthur. â€œHaving so many young people involved means the energy is just incredible,â€ Patrick, 24, from Cambridge, said. After graduating, he hopes to pursue a career in acting and screen writing.

Pendragon is directed by Frank Whately, Joanna Horton and Jeremy James Taylor, with musical direction by David Nield and John Pearson, the team that brought The Ragged Child to the Rose last year. The International Youth Arts Festival is a celebration of theatre for young people and has attracted acts from across the globe, in addition to many from the local community. It runs from Friday 3 to Sunday 12 July 2009 at a range of venues in Kingston.