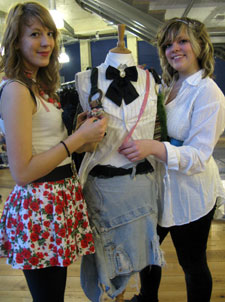 Style-savvy Kingston University fashion students found themselves in hot demand when they volunteered their services as accessory advisers at a major charity fundraiser. More than 150 fashionistas descended on the boroughâ€™s Rose Theatre for the Swapping for Good event staged by the Queen Elizabethâ€™s Foundation for disabled people – all eager to snap up new additions to their wardrobes while also donating unwanted garments of their own to the cause.

Students Laura Hemesley and Clara Halsall, both 19 and midway through the first year of their Kingston University fashion courses, quickly found themselves in the thick of the action. Armed with fabric swatches, netting, ribbon and beads, they set to work showing event-goers how they could customise clothing to reflect their individual tastes. "Something as simple as a corsage made from a small piece of patterned material or a contrasting belt covered in bright buttons could be all it takes to give an unwanted top or dress a new lease of life," Laura said. "It was really rewarding for us to support such a deserving charity and at the same time show people how they could think about taking a more sustainable approach to dressing up, recycling clothing by adding an extra splash of colour or some quirky trimmings," Clara added. 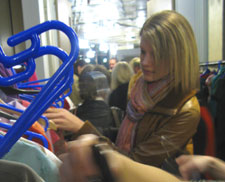 International student Hui Xu, who is completing a postgraduate programme in fashion and the creative economy, was also keen to coax the assembled trend-setters to adopt a fresh outlook on fashion. "Charity shops contain so many amazing items that, with very little effort and minimal cost, can be given a complete makeover," she said. "It only takes a few pieces of velcro fastened in the right place, for example, to transform a pair of cut-off menâ€™s jeans into a chic womanâ€™s skirt. Itâ€™s surprisingly simple to be that bit more adventurous and do something good for the environment at the same time."

The Kingston students werenâ€™t the only ones doling out expert fashion advice. Celebrity stylist and television presenter Nicky Hambleton-Jones was also on hand to offer pointers to the image-conscious attendees. Head of Business Development for the Queen Elizabethâ€™s Foundation Simon Dillsworth described the event – the first of its kind to be staged by the Surrey-based charity – as a phenomenal success. He estimated at least 750 garments and accessories had been donated by fashion swappers. About 450 of the items had found new owners during the course of the evening, with the remainder now destined to be sold in the charityâ€™s 13 shops. "The prospect of being able to contribute unwanted clothing to a good cause and, at the same time, have the chance to be among the first to rummage through the rails to find a new outfit seemed to really capture peoplesâ€™ imaginations," Mr Dillsworth said. 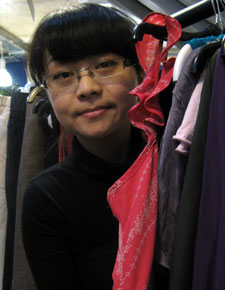 Much of the eventâ€™s popularity could be attributed to the current economic climate, he added. "As the recession takes hold shoppers wonâ€™t necessarily have as much money to invest in their wardrobes as they might once have had, which is where a concept like this really comes into its own," Mr Dillsworth said. "The ethical dimension of being able to recycle clothing in a sustainable way by swapping it with fellow fashion lovers also gives it an added appeal."