Exhibition is put to the touch test

Exhibition is put to the touch test 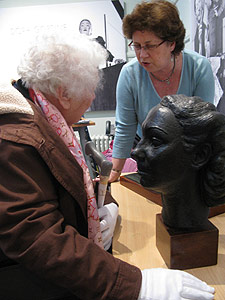 Visitors to museums and galleries would usually expect to be on the receiving end of a stern ticking off if they dared lay as much as a finger on any of the prized exhibits. The rule book was set to one side though when members of the Kingston Association for the Blind decided to take in the works of legendary sculptor Dora Gordine.

A 20-strong group got a true feel for the artist’s creative genius during a trip to Kingston Museum where, after donning protective white gloves, they were given the go-ahead to run their hands over many of the works on show. The visit, made possible through a grant from the Heritage Lottery Fund, was part of programme of activities being staged by Kingston University and Kingston Museum as part of a major retrospective showcasing the long-forgotten artist’s prolific talent.

The curator of Kingston Universityâ€™s Dorich House Museum, Brenda Martin, said Latvian-born Gordine, in her heyday acclaimed as the finest female sculptor in the globe, would have been delighted her work had captivated an unexpected audience. “Dora was a vivacious, tactile, charismatic person who was particularly keen on having people stroking and touching her sculptures,” Mrs Martin said. “She always worked in bronze because she liked the eternal feel of the material and insisted that her work was cast to the highest specification so it had an extremely fine finish. As far as Dora was concerned, her works were her legacy to the whole British nation and seeing the looks of wonder spread across her visitors’ faces as they felt her incredible talent at their fingertips gave her a real buzz.” 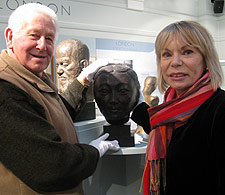 Enthused by the experience, members of the Kingston Association for the Blind are now turning their hands to some art work of their own, fashioning heads and small sculptures out of clay. Once fired and painted, the creations are set to have their own special moment in the spotlight – going on display on plinths around Kingston Museum.

The association’s development manager Della Murphy said the group members had been enormously inspired by the chance to actually feel the exhibits for themselves. “Most have very little vision – some can distinguish between light and dark while others can make out just an outline of an object – and it’s extremely rare for them to be given the opportunity to explore an exhibition in such a way. Being able to actually touch and make sense of the displays gave so much more meaning to the occasion and Iâ€™m sure they have taken away a far greater appreciation of Dora Gordine and her work,” Mrs Murphy said.

Learning and access officer Caroline Burt said the team at Kingston Museum was committed to making its collections accessible to the broadest range of people possible. “We’re constantly thinking of ways that we can make our exhibitions a multi-sensory experience for visitors and were determined to come up with creative approaches to bring Dora Gordine’s work to life for as many audiences as we could,” Miss Burt said.