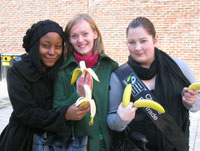 Students and staff from Kingston University have munched their way through around 2,000 Fairtrade bananas in an attempt to set a new world record. The University and the Studentsâ€™ Union teamed up with the Fairtrade Foundation to take part in the challenge on Friday 7 March which aimed to raise awareness about the importance of ethical shopping. Across the capital school pupils, clubbers, knitters and environmental campaigners were also chopping their way through the yellow fruit to see if they could set get into the record books for the greatest number of people eating bananas during a 24-hour period.

Staff dressed as gorillas roamed the Universityâ€™s four campuses encouraging people to take part in the challenge organised by the Studentsâ€™ Union Volunteer Bureau and student volunteering charity, Junction 49, with help from the Sustainability Team. Boxes of free bananas were available on a first come first served basis to people on campus – funded by Junction 49, which donated Â£360 to buy fruit.

Kingston University became the third university in London in to achieve Fairtrade Status in 2006 and Fairtrade products including coffee, tea, chocolate and fruit are available across all University-run campus shops, canteens, cafes, restaurants and bars. Hannah Smith, from the Sustainability Team, said the challenge was part of the Universityâ€™s efforts to raise awareness about how shoppers could help create equality for farmers and producers worldwide. "It was great fun but there was also a serious message about where we get our food from and how we can all make choices to help change the way the current system prevents people from non-western nations from pulling themselves out of poverty," she said. "Buying Fairtrade products means consumers are paying realistic costs for a product on the global market." 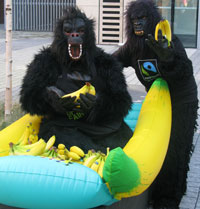 The record-attempt was part of Fairtrade Fortnight which aims to raise awareness about the importance of buying Fairtrade products and making ethical choices. In total more than 288,500 people took part across the capital. Campaigners are now calculating the total number of bananas consumed before applying to see if their efforts can be acknowledged as a new record. There is no previous record for eating Fairtrade bananas.

Bex Clarke, from Fairtrade London campaign group, said Kingston University had played an important part in the record-attempt. "Two billion people live on less than two dollars a day and now more than ever, itâ€™s important that people buy Fairtrade goods to support producers in developing countries who are faced with rising food and production costs as prices soar," she said. "It costs very little for us to make a real difference to farmers and their families."