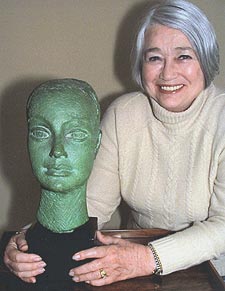 The moment sculptor Dora Gordine set eyes on 22-year-old Maren Friedman, she was determined to capture her Jackie O-style looks forever. Little did the modest American mother-of-two imagine that their chance meeting would lead to a firm friendship. Nor did she ever envisage that, almost half a century on, she would be back in London taking centre stage to reminisce about her encounters with the eminent artist.

These days the proud owner of three rare Dora Gordine bronzes that take pride of place in her New Jersey home, Mrs Friedman returned to the capital this month to share her recollections of sitting for the artist. In a talk organised by Kingston University and Kingston Museum with support from the Heritage Lottery Fund, she recalled her first chance conversation with the woman once hailed as the finest female sculptor in the globe. â€œIt all came about in 1960 when my husband, Fred, worked as marketing manager for Revlon and weâ€™d moved to London for a couple of years with his job,â€ the now 70 year old said. â€œI went along to the American Womenâ€™s Club as a one-off and Dora Gordine happened to be there giving a speech. Afterwards she gave me her phone number and asked me to call her to arrange a sitting. She was quite intimidating and certainly wasnâ€™t the sort of person you turned down.â€ Mrs Friedman admits to being slightly taken aback by the artistâ€™s interest in her. â€œI was just a young slip of a thing, with a small daughter and a baby, and was very flattered sheâ€™d approached me. The other women were a bit ticked off that she hadnâ€™t asked them, especially as I wasnâ€™t even a member of the club,â€ she said.

As Gordine set to work sculpting the young motherâ€™s head, the novice model found herself a regular visitor at the artistâ€™s South West London home and studio, Dorich House – now a museum owned and operated by Kingston University. â€œI spent almost three months travelling there from my home in St Johnâ€™s Wood at least two or three times a week, sitting for Dora between 9am and 4pm. It was an absolutely fascinating process,â€ Mrs Friedman said. â€œLuckily Dora didnâ€™t need me to stay completely still the whole of that time. She talked about all sorts of things, including what it was like growing up in Russia and her time working as an artist in Paris. Sheâ€™d certainly led a very colourful life and was very keen on staying healthy – I remember our lunch was usually gooseberries and yoghurt. Iâ€™d never been all that knowledgeable about art before but, after spending time with Dora, I developed a real passion for it, especially sculpture.â€ 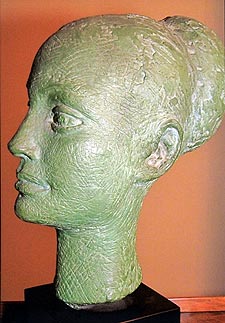 When the head was finished, the Friedmans decided to buy the work. â€œDora gave us the option – we hadnâ€™t commissioned it, so we didnâ€™t have to buy it,â€ Mrs Friedman said. â€œBut Fred and I loved the way sheâ€™d captured me in her own style, even if my daughters found it slightly scary. We couldnâ€™t afford the $700 fee, so Dora let us pay in instalments. She was very keen to go on and sculpt my full figure, which would have been nude of course, and, at that point, I did have to say no.â€

In 1962 the Friedmans returned to the United States, before living in London again from 1964 to 1966 and buying two more of Gordineâ€™s sculptures. â€œDoraâ€™s first question was always: â€˜How are the children?â€™ and Iâ€™d reply: â€˜Fine, thank youâ€™ thinking she meant my daughters. Then sheâ€™d say: â€˜And how are your children?â€™ I soon realised that what sheâ€™d been talking about first and foremost was her sculptures. To Dora, who had no children of her own, they were like her babies.â€

After returning to the United States in 1966, Mrs Friedman lost touch with Gordine until Kingston University art and design historians Dr Jonathan Black and Brenda Martin contacted her. She was shocked to hear that, after Gordineâ€™s husband, Richard Hare, died suddenly in 1966, she had all but disappeared from the arts scene and become a virtual recluse.

Revisiting Dorich House without Dora being around seemed very strange, Mrs Friedman said. â€œShe was such an unforgettable lady and the place feels so empty with her. Having said that, as my husband Fred and I walked up the stairs there recently I suddenly had a real sense that Dora was with us. Iâ€™m not the kind of person who believes in that kind of thing usually, but I had a strong sense her spirit was with us.â€

The curator of Kingston Universityâ€™s Dorich House Museum, Brenda Martin, said it had been intriguing for exhibition-goers to hear about the experiences of someone who had actually known the sculptor and watched her work take shape. â€œMarenâ€™s talk was full of amazing anecdotes and provided a fascinating insight into what it was like to know Dora Gordine during the height of her creativity,â€ Mrs Martin added.