Stars of the show

Stars of the show 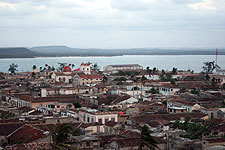 Kingston Universityâ€™s film-making group w.in.c films found the cameras turned on them at a recent film festival in Cuba. As the only all-female team, and one of the few from Europe, journalists were quick to pick up on their story and the four film-makers were in demand by camera crews, even appearing on Cuban radio.

â€œWe were making a documentary about our experience, and suddenly we realised crews were filming us,â€ film-maker and lecturer Abbe Fletcher explained. â€œIt was an amazing experience to be part of the festival and to raise awareness of womenâ€™s film-making here at Kingston. The local people were so proud of the event and lined the streets in a celebration parade.â€

Ms Fletcherâ€™s film, Under Construction, was selected to appear in the 7th Cine Pobre, held annually in Gibara and Holguin, Cuba. Both towns were severely damaged by Hurricane Ike last September. â€œThe roof of the main cinema in Holguin was ripped off, and itâ€™s still missing,â€ Ms Fletcher said. â€œBut they rigged up a temporary cinema in the lobby, where my film was shown, and even screened work in museums and by the roadside.â€

Kingston MA film-making graduates Sabela Pernas Soto, Claudia VÃ¡squez Ramirez and Petra Niskanen set up w.in.c.films with Ms Fletcher in December. Ms Fletcher and Petra - now a teaching assistant on the MA film making course - met up with Spain-based Sabela and Columbia-based Claudia, at Havana airport. There, they joined other film-makers on three buses for a 12-hour drive to the festival. â€œIt was a wonderful way to see the real Cuba,â€ Ms Fletcher added.

The festival was established by the late Cuban film-maker Humberto Solas who died last September making this the first festival without him. During their stay, the team compiled over 20 hours of footage, which they plan to edit into a 30-minute film, entitled The Road to Gibara, and hope to screen at next yearâ€™s Cine Pobre. â€œAs weâ€™re based on different continents, weâ€™ll edit over the internet,â€ Ms Fletcher added. â€œThis is a truly experimental process and weâ€™re pushing the boundaries of modern film-making both within w.in.c and on our MA in film-making at Kingston. It was wonderful to work as a genuine collaboration and to help Kingston University communicate with the world.â€