Kingston University has rolled out the red carpet in recognition of a leading animator and film industry executive. Shelley Page, the Head of International Outreach for Hollywood movie powerhouse DreamWorks Animation, has been named an Honorary Doctor of Arts.

With more than 19 feature film credits to her name, Page has helped bring such Box Office sensations as Shrek, Shark Tale, Antz, Kung Fu Panda, the recently-released Monsters vs Aliens and her own personal favourite The Prince of Egypt to the big screen. Her career highlights include working with acclaimed producers and directors Robert Zemekis, Steven Spielberg and Jeffrey Katzenberg.

Pageâ€™s first foray into the world of screen animation dates back to the early 1980s when she landed a role under legendary director Richard Williams. A former freelance illustrator, she soon found herself hooked on the creative challenges of movie-making and a meteoric rise through the ranks ensued. After serving as head of backgrounds on the Academy Award-winning Who Framed Roger Rabbit?, Page was headhunted to work at Steven Spielbergâ€™s London-based Amblimation Studio. By early 1995, she had been hand-picked to join the team responsible for launching DreamWorks Animation as a major player in the film industry.

These days charged with sourcing and nurturing fresh talent to fill the DreamWorks stable, Page has a particular passion for student animation. She devotes much of her working life to travelling the globe developing relationships with animation schools and championing the potential of aspiring animators at international film festivals. Her influence extends to the graduation juries of a string of prestigious institutions across Europe, as well as to the advisory boards and selection panels of such international festivals as Annecy in France, Imagina in Monte Carlo, Siggraph in the United States and Indiaâ€™s PIFF and 24FPS.

Among the plaudits she has accumulated along the way, being named an Honorary Doctor of Arts by Kingston University is an accolade Page holds particularly dear to her heart. She has had close connections with the institution in South West London since completing a degree in graphic design and illustration at its predecessor, the Kingston College of Art, in 1977. Returning to her alma mater to collect an honorary degree from the Faculty of Art, Design and Architecture three decades on had been a poignant occasion, she said. "It feels wonderful to receive this recognition but Iâ€™ve always been aware that my activities on behalf of institutions and animation students worldwide have given me so much more in return – a closer awareness of the next generation of young talent as well as far greater understanding of the challenges and pleasures of striving for academic excellence," Page said. 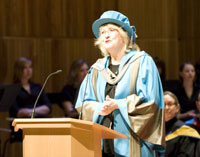 While her first Kingston graduation ceremony had passed in something of a blur, Page retains strong memories of her student days and the work ethic instilled in her by her lecturers. "I vividly remember having to work exceptionally hard at Kingston – often pushing to breaking point the boundaries of what I then believed myself capable of as an artist," she recalled. "One of the greatest benefits of my education was the fact that I was taught by academics who were also mostly working professionals. In fact what attracted me to Kingston in the first place was its close ties with industry. This is something that has never been more important – the demands of the industry are now so great that no-one can afford to graduate without having taken every advantage of the best possible advice from professionals within the sector."

In todayâ€™s challenging economic climate there would be more call than ever for creativity to help drive the industry forward, Page added. "With technological innovations being launched at bewildering speed, it will never be sufficient to be trained simply to meet current demands. Now, more than ever, we need brilliant minds to lead us to the next direction," she said.

Acting Head of the Universityâ€™s School of Communication Design Bernadette Blair said being able to honour a former Kingston graduate who had risen to become such a prominent figure in the animation industry had been momentous for students and staff alike. "Shelley Page is a long-standing advocate of student animation and someone who has worked tirelessly to encourage emerging talent," Dr Blair said. "Countless young animators and illustrators owe their career success to her inspirational guidance. It is an enormous privilege for Kingston University to be able to salute Shelleyâ€™s own phenomenal professional achievements as well as her commitment to cultivating the next generation of creative genius."