Project empowers pensioners to beat the blight of fuel poverty

Project empowers pensioners to beat the blight of fuel poverty 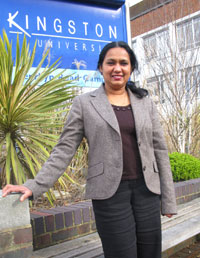 Researchers from Kingston University are spearheading a drive to help older householders reduce their carbon footprint and cut their energy bills at the same time. A team from the Universityâ€™s School of Surveying and Planning has embarked on a year-long project to examine the best ways to engage people aged 65 and over in the debate on climate change and encourage them to curb their fuel consumption.

Launched with the support of a Â£120,000 grant from the Engineering and Physical Sciences Research Council (EPSRC), the initiative will investigate steps pensioners can take to improve energy efficiency, live more sustainably and boost their quality of life.

Principal investigator Dr Yamuna Kaluarachchi said while there was an ever-increasing array of schemes being put in place to address climate change, it was widely acknowledged that real progress would only be made if individuals changed their own behaviour. "By using simple techniques to adjust some of their everyday routines, it can be surprisingly easy for older people to reduce the amount of electricity and gas they use, both saving money and doing more to protect the environment along the way," she said. "Often itâ€™s a question of householders simply not knowing which heating systems or appliances are the most efficient or what government grants are available to help them cover the cost of such modifications as installing more effective home insulation."

The research was all the more important when, of the 2.4 million households across England affected by fuel poverty, at least half contained one or more people aged 60 or over, Dr Kaluarachchi said. "A common thread of fuel poverty is the need for people to be indoors for long periods of time which inevitably creates a greater demand for heat, light and other forms of energy," she explained. "Older people, the long-term sick and families with very young babies and toddlers are particularly susceptible to this trap."

Working closely with partners Age Concern, the Energy Saving Trust and Friends of the Elderly, the researchers hope to reach up to 5,000 people aged 65 and over during the course of the project. They have already conducted a number of focus groups and organised workshops, seminars and drop-in sessions to share advice with their target audiences and encourage a better dialogue about the particular challenges they face trying to improve energy efficiency. The researchers will also monitor small cluster groups for the full 12 months, arming participants with carbon calculators and carbon meters to help them keep a closer eye on exactly how much energy they use and when.

The team has already encountered enormous enthusiasm for its work. "Older people are being hit hard by rising costs and have a real appetite to find out more about conserving energy. Many also care deeply about playing a part in preserving the planet for their grandchildren," Dr Kaluarachchi said.Â

As part of the project, the researchers aim to compile a 36-page booklet packed with tips to help older people adopt more environmentally-friendly lifestyles. They also plan to produce a CD, factsheets and leaflets as well as devising training programmes for the volunteers who staff community centres frequented by the older age group. "There is a lot of energy saving advice already available in one form or another but often older people donâ€™t know where to access it or it isnâ€™t communicated simply and clearly enough. Our aim is to get a far better feel for what is important to them and then pull all the different strands together to provide them with the information theyâ€™re looking for in formats that best meet their needs," Dr Kaluarachchi said.Â

Although the project will initially concentrate on older communities across London and South East England, Dr Kaluarachchi hopes it will gain enough momentum be rolled out across the United Kingdom within the next three years.