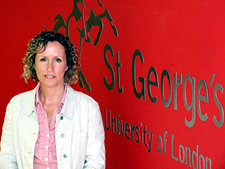 A physiotherapy lecturer has won a national charity award for her pioneering work with stroke survivors. Dr Fiona Jones, who is based in the Faculty of Health and Social Care Sciences run by Kingston University and St Georgeâ€™s, University of London, has gained the Stroke Associationâ€™s Excellence in Stroke Care Award. She was put up for the accolade by fellow lecturers and by Eileen Collins, who first met Dr Jones four years ago when she experienced a stroke.Â Â Â

Dr Jones said she felt honoured to receive such recognition from a charity representing stroke survivors. â€œIâ€™m really humbled by the award because my work has always involved trying to consider the needs of people who have experienced a stroke as much as possible,â€ she said. She was particularly touched to have been nominated by Ms Collins. â€œEileenâ€™s been a real inspiration to me. Sheâ€™s had a series of strokes and is now in a wheelchair but sheâ€™s a resourceful woman who lives a full and active life,â€ Dr Jones said.

Ms Collins, from Carshalton, South West London, who gave up her job as a probation officer and had to relearn basic tasks including talking, writing and looking after herself after a stroke in 2004, said she had been equally inspired by Dr Jones. â€œFionaâ€™s sincere and nurturing and has always treated me as a person rather than a patient. She made me feel valued when I was down and made me feel I still have a role in life,â€ she said.Â  Ms Collins is now a member of an advisory group for the Stepping Out programme for stroke survivors launched by Dr Jones last year.Â  She was one of the first participants to take part in the programme, which helps stroke patients adapt to living with a long-term condition. â€œFiona made me realise that you can get better if you persist and that you can do the things you did before, you might just need to do them a bit differently or a bit more slowly,â€ Ms Collins said.

The Stepping Out programme trains health professionals including nurses and therapists to work with individuals to devise their own goals and future plans. It involves one-to-one sessions for stroke survivors and professionals caring for them and uses a workbook designed by Dr Jones in consultation with stroke survivors. The approach encourages self-management through small personal targets and sharing ideas and solutions with other people after stroke.

Dr Jones, who has more than 25 yearsâ€™ experiences as a physiotherapist specialising in neuro-rehabilitation, started researching the programme four years ago as part of her doctorate by getting feedback from patients and health care professionals. The scheme was officially launched in Dundee in 2008 and is being used by an increasing number of health authorities around the United Kingdom.

The Stroke Associationâ€™s judging panel highlighted the Stepping Out initiative in its reasons for honouring Dr Jones. â€œThe influence Fiona has had in her approach to person-centred care and the way she has used her role to influence others and support stroke survivors is fantastic. This is particularly evident in the success of the Stepping Out programme,â€ the panel said.

The accolade is part of the Stroke Associationâ€™s annual Life After Stroke awards, which celebrate the achievements of survivors, carers and practitioners. Stroke Association spokesman Richard Mountford said: â€œEvery day we witness people displaying immense courage and determination as they work to overcome the effects of stroke, as well as great patience and persistence in overcoming disabilities and relearning old skills. We also see people showing true compassion and commitment encouraging others to rebuild their lives by providing them with the support they need following a stroke. It is for this reason that we organise the Life After Stroke Awards, where we formally recognise and celebrate the achievements of these remarkable people.â€

The awards will be formally presented at a ceremony at Claridge's Hotel in London on 23 June. The Stroke Association is the only national charity solely concerned with helping people affected by stroke. Almost 300,000 people in the United Kingdom are currently living with the consequences of a stroke.