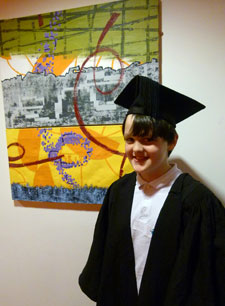 A group of primary school children from across Kingston have been given a taste of university life in a brand new scheme designed to inspire their higher-education dreams.

An aspiring artist, a fledgling forensic scientist and a wannabe wildlife photographer were among the 32 pupils from seven primary schools across the borough who took part in the project, called Launchpad. Developed by Kingston University, the initiative aims to encourage children to think about their future and the possibility of studying for a degree.

The group of nine to 11 year olds spent a day at Kingston University, visiting some of the facilities and learning what goes on inside the lecture theatres and libraries. They even donned mortar boards and gowns and took part in their very own mini-graduation ceremony lead by Vice-Chancellor Professor Julius Weinberg.

Jacob Booth from St Matthew's Primary School in Surbiton had already set his sights on becoming a sculptor. The 10 year old said he spends his spare time at home making clay models of people and trains. "I'd never thought about going to university before - but I saw some really cool paintings on the walls around Kingston and there were lots of amazing books about art in the library," he said. "It made me realise I really want to study art to help me in my career." 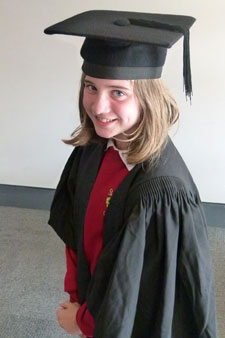 Jacob wasn't the only pupil from St Matthew's who felt inspired. For Sofia Popovich, also 10, the trip confirmed her desire to study for a degree in criminology and a sneak peek at the science laboratory was enough to change classmate Charlotte Brand's mind about higher education. "I didn't think I wanted to go to university, but seeing the science lab made me realise it is something I'd really like to do," the 10 year old explained. "I'd like to study animal sciences as I want to be a vet or a zoologist, or even a wildlife photographer."

Linda Hughes, a teacher at St Matthew's, accompanied the children on their visit to Kingston University. "It was such an inspiring day for them - for many it's completely changed their outlook," Mrs Hughes said. "Some already wanted to go to university and this has just made them more certain, but for others the day has opened up a whole new range of possibilities and encouraged them to think about careers they may never have considered."

At the end of the day's activities the children were presented with certificates from Professor Weinberg, who impressed the youngsters by being dressed in full graduation robes for the occasion. He told the budding undergraduates how important it was to him to talk to future students. "You could be at Kingston University in just eight years, and that time will go very fast," he said. "I'm really pleased you've had the chance to visit the University and get a little taste of what happens here. A degree isn't the right path for everyone, but I hope some of you may decide it's something you'd like to work towards."

The primary schools who took part in the event were St Joseph's in Kingston, St Mary's in Chessington, Green Lane in Worcester Park, Knollmead and St Matthew's in Surbiton and Malden Manor and King's Oak in New Malden.