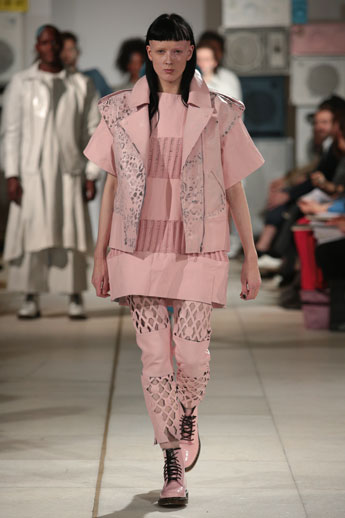 It's a well known fact that mixing red and yellow makes orange, while yellow and blue makes green, but what happened when Kingston University fashion students were asked to blend their research skills and creative talents with leading British paint and wallpaper company Farrow and Ball? Industry experts found out when the students' interpretations were unveiled in a one-off colour chart-inspired collection that burst on to the runway on the eve of London Fashion Week.

Famous for naming its paints with intriguing appellations such as Middleton Pink and Cat's Paw, the heritage design brand only releases its latest colours every few years. To celebrate the launch of nine new hues, including Nancy's Blushes and Stiffkey Blue, the company approached Kingston University students to see what the next generation of fashion designers could make of its rich, pigment-heavy paints. Each look, created by teams of postgraduate students, reflected the character and style of a new colour, making a splash on the catwalk complete with spray-painted Dr Marten boots.

Farrow and Ball's creative manager Charlie Cosby said the company had been intrigued to see what the fashion students had made of its latest array of quirkily-named colours. "We weren't sure what to expect when we began this project but the tenacity and creativity with which the Kingston University MA Fashion students approached the brief left us mesmerised," she said. "They took our nine new colours and created completely conceptual outfits while still remaining sensitive to our brand. We were incredibly excited to see the lid lifted on the resulting collection on the fashion show runway."

Kingston University's course leader for MA Fashion, Andrew Ibi, said the students had been inspired by the narratives and ideas Farrow and Ball had created for each new colour. "They approached the project with wit, sensitivity, drama and diligence, preserving the spirit of Farrow and Ball's iconic heritage brand but also trying to capture something both distinctive and cutting-edge in their designs," he said. 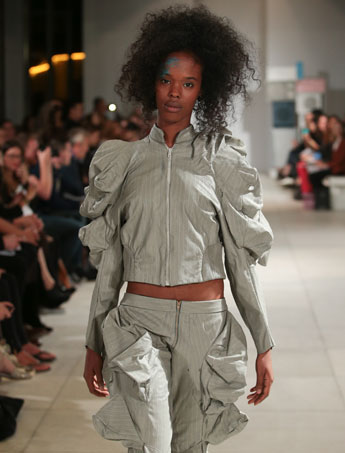 "The students have ambitions beyond education, with many of them working on solid, creative business enterprises during their studies. Teaming up with a brand such as Farrow and Ball has given them invaluable experience of the work entailed in putting feasible, youthful and culturally-relevant collections together," he said.

The show at Queen Elizabeth Hall on the capital's Southbank had set the tone for London Fashion Week which launched the following day, Mr Ibi added.

The final year students also caught the audience's eye with a line-up of other collections underpinned by the knowledge they had acquired in the studios at the University, which is rated one of the top providers of fashion education in the United Kingdom. Eleven of the up-and-coming designers were selected to unveil their latest looks on the runway, while others staged an exhibition featuring a range of projects including fabrics printed with the help of remote controlled cars.