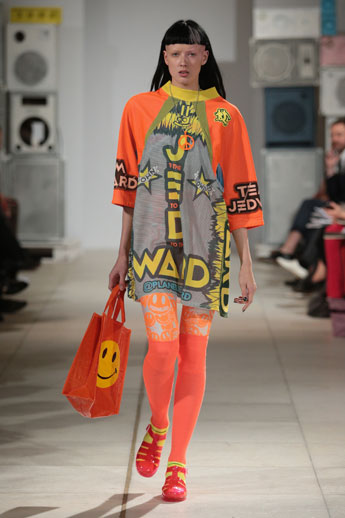 A vibrant sportswear collection dedicated to Jedward has been turning heads as it hit the catwalk at Kingston University's MA fashion show in the run up to London Fashion Week.

Self-confessed John and Edward Grimes fanatic Eppie Conrad had fashionistas doing a double take as she lit up Queen Elizabeth Hall on London's Southbank with a luminous feast of fashion inspired by the Irish pop duo who rose to fame on ITV 1's flagship talent show X Factor in 2009.

"I've been a Jedward fan since I saw them perform Britney Spears' hit 'Oops I did it again' on the X Factor," the young designer from Newcastle explained. "I loved their enthusiasm for performing and their determination and self belief. They always bounced back, whatever criticism the talent show judges threw at them - they just rose above it and stayed positive." The first time Eppie met the twins was at Hamley's toy store in London a couple of years ago and she has met them several times since. "I think the way they've followed their pop dreams and not let anything stand in their way is inspirational," she added.

Eppie's dedication to John and Edward and the community of fans that has grown up around them is only rivalled by her love of fashion design. After completing a BA in Fashion at Northumbria University, where she developed a distinctive sportswear style, Eppie decided to hone her craft and signed up for Kingston University's Master of Arts in Fashion. She conceded some people were apprehensive about her focusing on Jedward for her final MA collection, but said she hadn't been deterred. "As long as I believe in what I'm doing and I have confidence in it, I know it will be a success. I wanted to build on my strong sportswear roots and also incorporate my love of screen printing, so I had a clear idea of how I wanted the collection to look," she added.

Eppie created eight looks using polyester, stretch fabrics, denim and neoprene. The garments are tinged with more than a hint of early 90s rave subculture. Florescent tights in pinks and oranges are teamed with American football-style oversized t-shirts, sweatshirts and jackets. Each garment is adorned with elaborate, hand drawn images of her idols which Eppie painstakingly screen printed herself at the Thames Barrier Print Studio in Woolwich. Three of the brightly coloured outfits in her sportswear range are topped off with vivid orange, blue and green shopping bags, embellished with yellow smiley face emblems similar to those popularised by fans of Acid House music a decade ago. The hedonistic logo captures the enthusiasm and excitement conveyed by the young designer as she talks about her work. 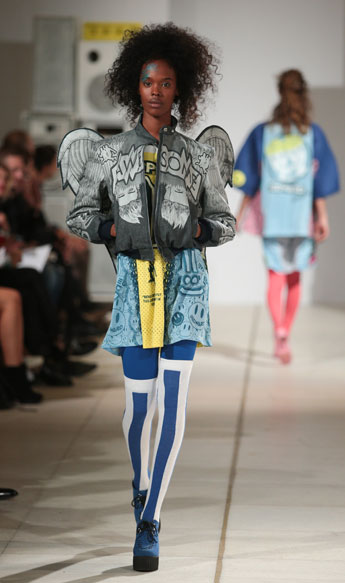 "I love screen printing. One of my ambitions is to have my own company creating prints for other designers in the future," the 26 year old explained. "Drawing has always been one of my biggest passions so it seemed a natural extension to experiment with print. I've drawn sketches of John and Edward since becoming a fan and when I shared the pictures with the other devotees online I got a really positive reaction." It had been incredibly exciting to be able to combine her love of drawing and printing with her devotion to Jedward in the collection, Eppie said.

The first time she managed to bring these two passions together was last year, collaborating with an Australian fan to design customised varsity jackets for the twins which they wore in the official video for their hit What's My Number.

"I met Dominique at the Children's BAFTA's in 2012 when John and Edward presented a children's television award. We discovered we had a shared love of fashion and decided to create jackets for the boys for their upcoming trip to America," Eppie explained. Dominique painted the jacket sleeves in stars and stripes and Eppie embroidered the front and back of the garments with intricate emblems and lettering.

With her Masters in Fashion now complete, the young designer is focussing on finding a position that will enable her to develop her printing skills as she aims to realise her dream of setting up her own print company.

MA Fashion course leader Andrew Ibi said Eppie had an explosive and unique style sense, with a personality to match, which helped her create a distinctive and original approach to fashion and textile design. "She was able to take a theme like Jedward and make us love it," Mr Ibi said. "She has her finger on the pulse - she really understands the mechanics of modern youth and the cultural significance of street and sport style."

And what did John and Edward think of the sportswear extravaganza unveiled by their superfan at Kingston University's MA fashion show on 12 September? "They sent me a direct message on Twitter saying how proud of me they were," Eppie exclaimed. "I saw it on my phone just after the show - they'd seen people tweeting pictures of the collection and they loved it."