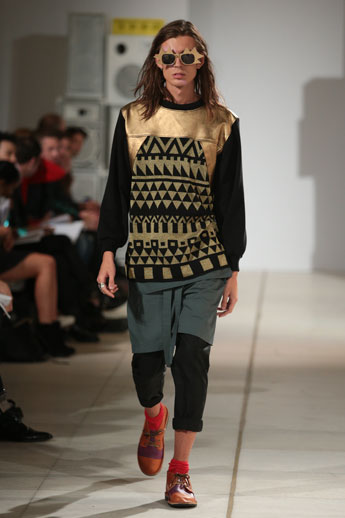 Kingston University's latest crop of graduating MA Fashion students have given industry experts and media commentators a first glimpse of some of their latest work at a major catwalk event. Eleven of the University's young designers were selected to launch their forward-thinking fashion on the runway at the Queen Elizabeth Hall in London's Southbank, to mark the culmination of their postgraduate studies.

Among the collections was a striking gold, black and red menswear range by Minka Lüsse. Inspired by the challenges of rebuilding post-apartheid South Africa, the Namibian-born designer's colourful bomber jackets and chunky knitted jumpers were a visual representation of her hopes and fears for those trying to create a more equal society.

Minka witnessed the struggles faced in the aftermath of segregation first-hand as the system was also enforced in her home country until 1990. Emblazoned with bold triangular shapes in gold, spray-painted leather, her garments incorporate age-old African patterns in a patchwork effect.

"I wanted to show how different motifs of all shapes and sizes can fit together to make something beautiful, in the same way that I believe people from all backgrounds can come together, whatever their race or social or economic status," the 25 year old explained. "The triangles and stripes that appear throughout my menswear range are based on emblems often seen in traditional African culture. The shapes vary in size and are often placed quite randomly," she added.

Minka's mother made the journey from Namibia especially to see the Kingston University show, which took place on the eve of London Fashion Week last month. "Mum didn't really get my collection at first, but when she finally got to see it on the catwalk she was really impressed," Minka said. "I felt so proud to have the chance to show my work at such a high-profile venue and it meant the world to me that she was there to see it." 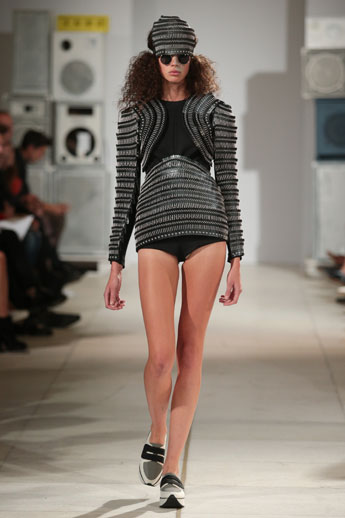 Laura Buechner, meanwhile, turned a traditional Mongolian yurt inside out for her high-end womenswear collection inspired by the ornate interior of the traditional Asian dwellings. The 28 year old from Berlin spent a year and a half living in Thailand after finishing her A-levels and became fascinated with the wider Asian region. "Mongolian culture is a blend of so many different Asian influences, I was determined to focus on this rich mix in my latest work," she explained. "I came across a photo of the inside of a Mongolian yurt and was astounded by how beautiful it was."

Laura incorporated materials used to build the circular tents in her garments, using leather, silk and wool felt coated in aluminium to create an edgy range with a sporty feel. "I was overwhelmed to be able to unveil my collection just ahead of London Fashion Week," Laura said. "For me, it was the highlight of the whole Kingston University course."

In another widely-praised collection, Barry Jude balanced precision tailoring with elaborate embroidery in his menswear range called Artificial Intelligence and Divinity. He regards his looks as a celebration of science and spirituality, inspired by the life and work of Enigma code-breaker Alan Turing. The 27 year old from Liaoning in north east China combined flowing shirts made from luxury cotton and linen with sharply tailored woollen blazers. The predominantly grey and black colour palette was interrupted by the deep, burnt orange of his striking sleeveless, belted tunic. 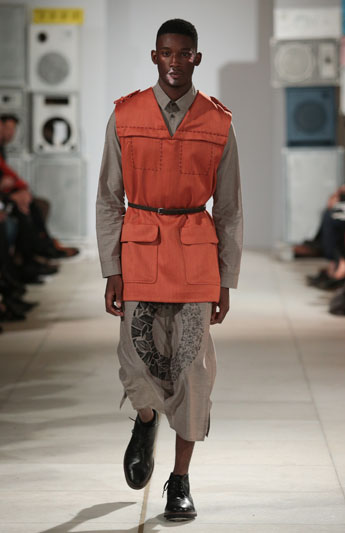 Barry believes he was destined for a future in fashion having spent his formative years watching his mother, Sun Jing, hard at work creating bespoke womenswear. "When I was young my Mum made everything from haut couture-style clothes for her clients to curtains and bedding for our home - she was a very talented tailor," Barry said. The young designer has relished the opportunity of studying in one of the world's leading fashion capitals and now has ambitions of securing a job in a luxury design studio in London.

"My mother tried to teach me to knit when I was young but I didn't have the attention span.," Elizabeth confessed. "I tried again as a young teenager and managed to master it. I love the extra dimension knitting gives to my work - it allows me to develop garments completely, even manipulating the fabric."

As well as unveiling their own collections, the students have also lifted the lid on the results of a collaboration with luxury paint and wallpaper specialists Farrow and Ball. Nine looks celebrated the launch of the company's latest paint shades - including Mole's Breath, Nancy's Blushes and Stiffkey Blue - reflecting the quirky character and style of the new hues.