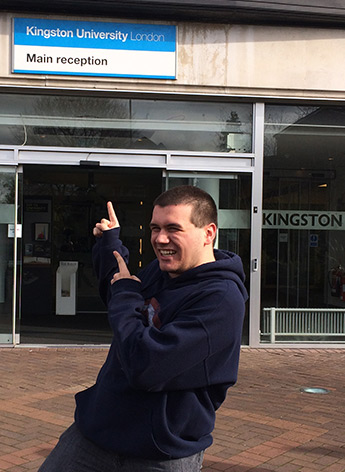 Two Kingston University students have joined the cast in the new series of Channel 4's hit show Gogglebox, a reality show that ventures into people's houses and captures their reactions to the week's television. Joe Teulon, 19, and Josh Townsend,20, will appear on the new series from Friday 7 March.

"I didn't realise how many people watch Gogglebox," Joe said. "I discovered it by chance, I had no idea how big it is." Explaining how he and Josh will be represented on prime time TV Joe said: "Sometimes we come across as typical uni students and sometimes we are really, really, really geeky about things; sat in my room wearing comic book t-shirts surrounded by Spiderman posters on my wall."

The first-year students met while waiting to go into a Forensic Science lecture in September 2013. Joe said: "I was waiting outside the lecture hall and I saw that Josh was reading an issue of the comic book Deadpool on his tablet. We got talking about our love of comics and quickly became friends."

Joe admitted that it took a little while to get used to the camera looking at them as they watched television together in Joe's bedroom in Feltham. "The camera is similar to the ones they use for the television show Big Brother." Gogglebox famously captures people viewing the shows in their own environment. "There's a debate over whether I'm a messy person or not; ask my mum and she'll say it's a mess...but it's an organised mess."

When asked about his own viewing habits Joe admitted that some of the TV shows were not what he would normally watch. "If I'm choosing TV for myself I'd stick on Doctor Who or Sherlock. If I had to pick a favourite boxset it would be a four-way tie between Breaking Bad, Scrubs, Buffy the Vampire Slayer and Angel," before admitting: "I'm showing my geek side with those selections!"

Joe is looking forward to continuing his course and can't wait for his second year. "Toxicology is really interesting and I have developed a new interest in entomology, the study of insects in forensics." One TV show that would be in line for his criticism is the Crime Scene Investigation (CSI) series of forensic investigation shows. "It's terrible and doesn't represent what it's really like."

Joe doesn't think that his appearance on TV will affect his normal student life; the filming crew work around his hectic student schedule. However, he hopes that his new found celebrity status will get him a priority place in the John Galsworthy Building's lifts at the university's Penrhyn Road campus.

Joe is also part of Kingston University's compact scheme that offers support and advice to students with strong academic potential. Joe also attended the Head Start summer school event which he found especially helpful for getting ready to start university. "Head Start got me used to how uni works and I made some really good friends I still keep in touch with now"

Find out more about studying Forensic Science at Kingston University