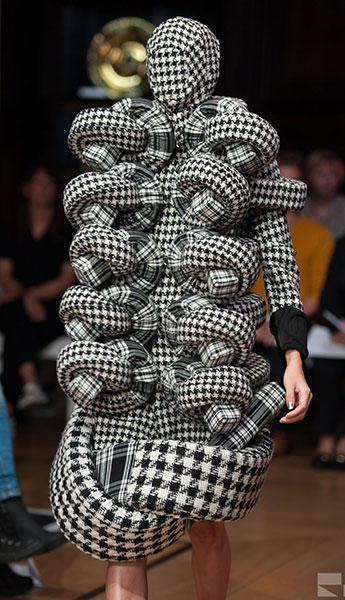 The sombre rituals of burial have inspired an up-and-coming designer to create a range of womenswear with a twist that hit the runway during London Fashion Week.

Syed Nisar, who showcased his work at Kingston University's MA Fashion Show at Stationers' Hall in central London, used huge sculpture-like knots as a signature design element throughout his black and ivory collection. With a background in textile design, the 29-year-old designer, originally from near Lahore in Pakistan, came up with the exaggerated padded creations to represent the way a body is tied in a traditional Muslim shroud.

"My collection explores different elements of death and burial," Syed explained. "The tying and untying of shrouds plays an important ceremonial role, so I decided to use knots as a focal point in some of my garments." The young designer, who interned with Alexander McQueen for six months during the summer of 2012, experimented with material and size to create the stand-out silhouettes of his wearable shapes. "I scaled up the proportions of the knots and played with fabrics and fillings to see what had most impact. I eventually settled on a combination of foam and wadding covered in a chequered tweed fabric. The black and ivory pattern was based on a traditional Arab scarf," he said.

Alongside the structured, knotted outfits in his final collection, Syed designed a full length, black dress fashioned from long strands of tubular rubber normally used to seal windows. The Pakistani designer also used draped black silk crepe to make outfits which symbolise the mourning period. The delicate, floor-skimming dresses and trouser suits were elegantly tailored to create fluid pieces reminiscent of traditional burkas. Throughout the collection, outfits are accessorised with black and houndstooth check full face marks, shaped like fencing faceguards, inspired by the Muslim custom of covering women's faces when they are buried. 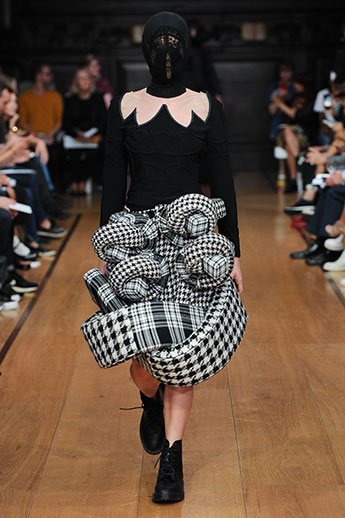 Growing up in Pakistan, Syed was originally set for a career in medicine but often found himself rebuked by his school teachers for drawing in his exercise books. The future fashion designer had no idea this doodling would one day lead him to his chosen career. "I had no concept of art and design. The idea that it was possible to forge a career in this area was beyond me," Syed explained. "My uncle is a chemistry professor and, when I was about 16 years old, he invited me to visit Lahore University with him. I came across the art studios and was amazed by what I saw. It was a life-changing moment."

Syed went on to study textile design at the National College of Arts in Lahore. Aged 21 he came to Britain and worked as a home furnishings designer in Yorkshire before signing up to hone his talents by completing Kingston University's MA Fashion programme.

Course leader Andrew Ibi said Syed had handled a sensitive subject very thoughtfully and had created a range of womenswear with huge visual impact. "Syed has developed a very challenging, emotional and personal collection with religion at the centre of its content," Mr Ibi added. "The ambitious shapes, engineering and pattern cutting are a testament to his vision, diligence and belief in craft and hand production. The collection touches on some very serious subject areas many would consider too taboo for fashion."

Syed now hopes to secure work in womenswear, ideally with a high-end, experimental designer. Ultimately he hopes to set up his own label and have the creative freedom to bring more of his imaginative designs to life.