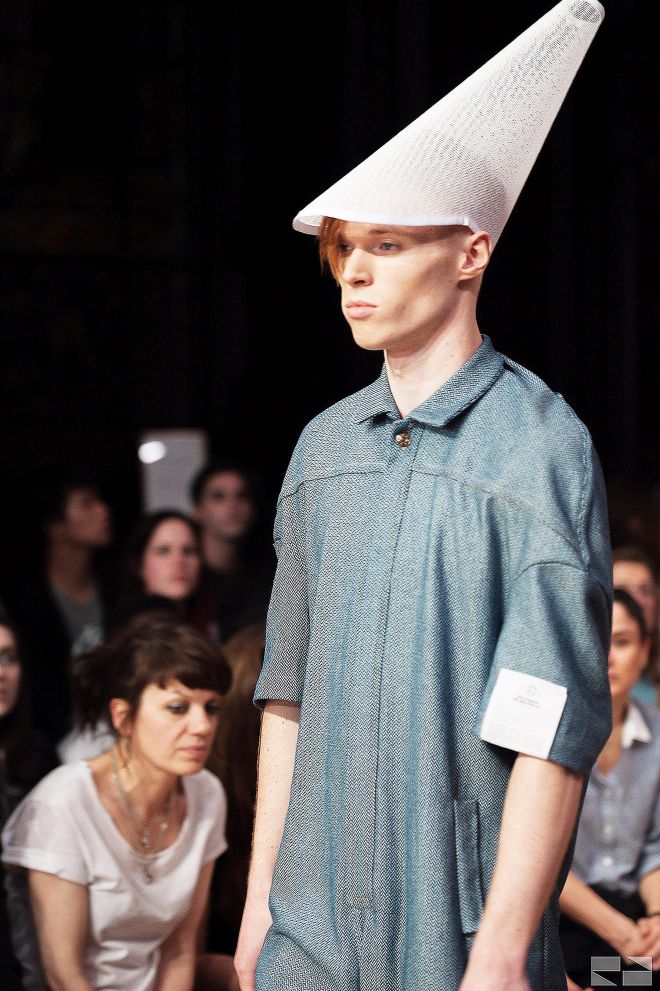 Esme Dominguez Pueyo's collection included dunces' hats portraying Spanish people who she believes are being fooled regarding the state of their economy.Denim workwear and dunces' hats have been given the haute couture treatment by a Kingston University MA Fashion student. Esme Dominguez Pueyo has used her latest collection, showcased during London Fashion Week, to make a stand about the impact of economic austerity in her native Spain. The menswear includes jersey T-shirts emblazoned with statistics, suits made from 100 per cent cotton denim and dunces' hats produced to portray her view that Spaniards are being fooled by the nation's politicians.

The 24 year old designer, originally from Valencia, worked with small, established British labels to develop her collection, called System Error. They included The London Cloth Company, home to one of the capital's first micro-mills using 19th Century looms, to create some of her cotton and indigo-dyed denim designs. Milliner House of Flora meanwhile produced the dunces' hats from a combination of net and printed fabric. Esme drew her inspiration for the thought-provoking headwear from artist and satirist Goya.

The collection, underpinned by information contained in economic reports produced by the country's Instituto Nacional de Estadistica (INE), reflected how strongly she felt about the difficulties facing Spanish citizens attempting to eke out a living in a period of economic uncertainty, Esme said. She added that she believed politicians had duped her fellow Spaniards, leaving the nation submerged in an economic crisis mostly affecting the middle class and the under-privileged. "People feel fooled, vulnerable and outraged and I wanted to convey the essence of those emotions in my collection," Esme said. "I am making a statement about the Government not only failing to help the needy, but also trying to conceal the misery that has taken hold across the country." 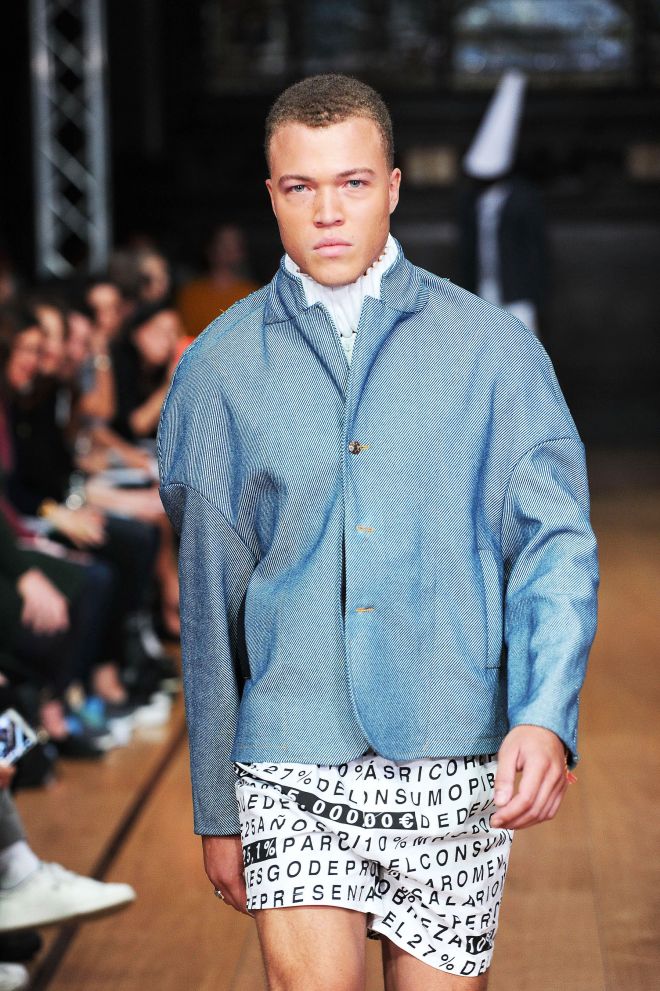 Cotton, denim workwear and jersey T-shirts emblazoned with statistics on the Spanish economy were featured in Esme Dominguez Pueyo's collection which aims to reflect the reality of everyday life.Esme, who has launched her own label called Delusions of Grandeur, strongly believes the fashion world needs to reflect the reality of everyday life. "Fashion is not only something that can be aesthetically appealing, it is also a powerful communication tool," she said.
Kingston University's MA Fashion course leader Andrew Ibi said it had come as no surprise that Esme's collection had provoked plenty of attention when it was unveiled in front of London Fashion Week pundits. "Esme has used her creative talent to capture the spirit of a disaffected generation with a sharp, satirical observation of Spanish politics," Mr Ibi added. "Her appreciation of balance, proportion and scale shine through in these designs, which also draw heavily on her previous background in fine art."